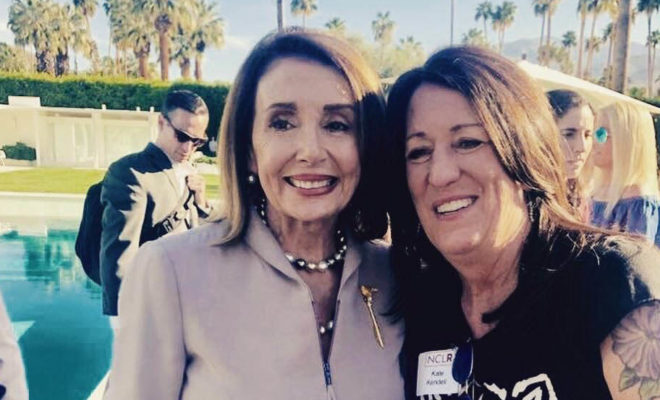 Do not follow where the path may lead, go instead where there is no path and leave a trail. -Emerson

(Editor’s Note: The following narrative is in Kate’s own words.)

I stepped down as head of the National Center for Lesbian Rights (NCLR) at the end of 2018 after 22 years. NCLR was at the forefront of virtually every major legal gain for the LGBTQ community over the course of its 44 years. I was privileged to be a part of many of those wins, including the Supreme Court’s ruling in favor of the freedom to marry in 2016.

I grew up Mormon in Utah. Not a great circumstance for a baby dyke in the 1970s and ’80s. But when I came out to my Mom, a devout Mormon, at 21, she told me the only thing that mattered to her was that I was happy. Her support made all the difference. I know so many LGBTQ who suffered rejection and violence. When you add racism, transphobia and economic inequality to homophobia, the mix is especially toxic. It is essential for those of us who have benefited from white privilege to deploy that benefit to both interrogate the legacy of domination and to commit to the systemic and structural reforms that will be required to assure we all live with dignity and justice.

It was an honor to work for 25 years on issues that directly impacted the LGBTQ community and to approach the work with an intersectional focus. I get to witness all the time young queer activists, parents and queers of color who are carrying the work of NCLR.