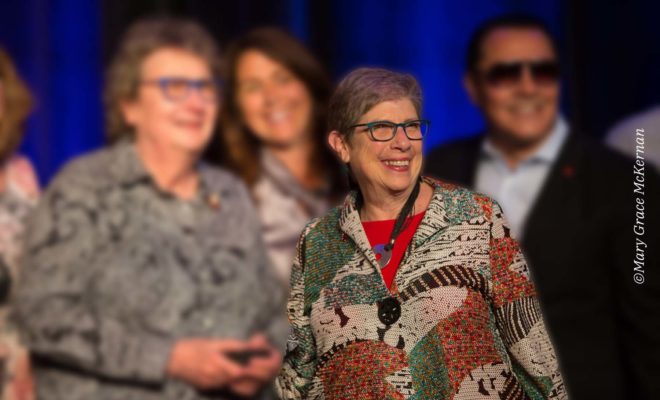 Truly, the best advice I ever received from someone on how to be a successful activist or executive was that everything one does can be summarized in four words “nag, nag, nice, nice” and it is absolutely true.

Louise began her activist career in the 1970s during the peace movement, the anti-Vietnam and anti-nuclear movement, the civil rights movement and then the women’s movement. In 1983 she was one of the leaders who founded the Puget Sound Women’s Peace Camp, which was one of several women’s peace camps focused on preventing nuclear war and more specifically stopping the production of the cruise missile, manufactured by Boeing.

During the 1980s Louise was the Director of Seattle NOW where she focused on issues such as violence against women, reproductive rights, economic justice and peace as a feminist issue. After coming out in 1983 – a thirty-something single parent of two daughters – her activism focused on the LGBTQ movement for equality.

Louise was hired by the Greater Seattle Business Association (GSBA) to be its CEO in 2002. GSBA is Washington State’s LGBTQ Chamber of Commerce and is the largest LGBTQ Chamber in North America with over 1300 business members. Louise served as CEO of GSBA for 17 years. During this time, GSBA moved from a networking organization of two employees into an effective, well-known and respected business organization, with 14 employees engaged in economic development.

GSBA is known as the regional convener, bringing together business leaders, community leaders and elected officials to advance equality and equity for the LGBTQ community. Just this past year, GSBA and seven other organizations received one of the first grants from King County to focus on the economic empowerment of the trans community. GSBA’s role in this grant is to work with members of the trans community who wish to become entrepreneurs.

In addition to economic development, GSBA is actively engaged in lobbying for small business and civil rights, as well as increasing LGBTQ tourism in the region and investing in the next generation of leaders through the GSBA Scholarship Fund. Started in 1991 with initial awards of $5,000 in scholarships to two LGBTQ students, GSBA now invests over $500,000 annually by providing scholarships and leadership development for LGBTQ students. Since that first scholarship, GSBA has invested more than $4 million in more than 400 students, most of whom would have no other means of support.

“I am very grateful for the honor of being able to share my leadership capabilities in a business organization that advances equality, equity, diversity and inclusion in the workplace and has provided hope and opportunity to hundreds of LGBTQ students,” Louise says.