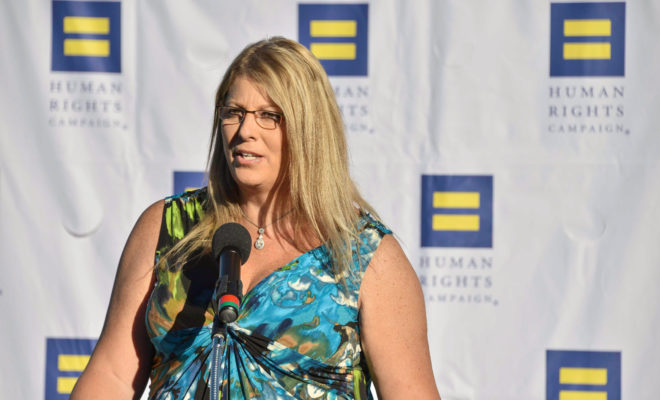 Don’t sweat the small stuff. Don’t fuel the haters or read their comments. Stay true, be authentic, stand up when you can and speak out when you have the opportunity. Others count on you, your voice and your authenticity.

(Editor’s Note: The following narrative is Meghan’s own words.)

I transitioned over 15 years ago. Working as an executive in a software company I, like many trans people, had to make the decision to live authentically or die. I knew the risks and was aware of the potential losses. There were limited role models and no road map to follow. Working in Houston, Texas, put me at risk for loss of job, finance, family and respect. I persevered.

I proudly helped my company achieve 100 percent on HRC’s Corporate Equality Index. I spoke out internally and externally at conferences. I spoke about the urgent need for trans inclusion and LGBTQ equality in statehouses from Texas to Connecticut and beyond. I provided testimony to Congress, visited major corporations to help with their trans inclusion and workplace policy. In 2008, I joined HRC’s Board of Directors, knowing full well the criticism I could face but knew someone had to advocate and be a voice from within for Trans inclusion. I joined HRC’s Business Advisory Council so that I could advocate for improvements in the Corporate Equality Index (CEI) so that we could raise the bar for businesses to attain 100% percent by requiring medically necessary care and surgical benefits for transgender employees.

I spent many late nights and early mornings in legislative hearings speaking up about inequality and battling discriminatory bathroom bills. I was invited to join President Obama’s LGBTQ Policy Committee in 2009 so that we could advocate at the highest levels of government for repeal of Don’t Ask Don’t Tell (DADT), the passage of Hate Crimes bills and the Violence Against Women Act to include the LGBT community, and finally I stood on the Supreme Court steps demanding marriage equality. I have participated on many boards since, including AIDS Foundation Houston and more recently the fight for Transgender military service.

I do all this so that I can leave a legacy of change in society. We need to be seen and to be seen as equal to others. My purpose is my journey to foster equality. My journey is fueled by passion. My path is lit by my values. My intention, commitment and compassion propel me forward.

Authenticity, for me, is the daily practice of letting go of who I think I’m supposed to be and embracing who I am. It’s about enabling others to find their voice and the realization of FULL FEDERAL EQUALITY. Plain and simple, our pursuit of happiness depends on being able to love who we love and be who we are, without judgment.