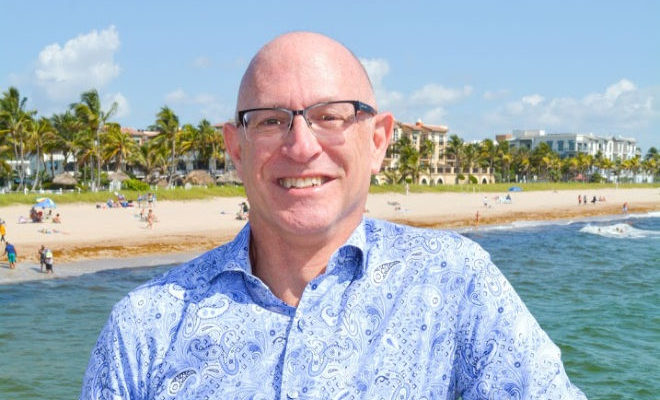 In November 1999, Drucker was appointed the first Director of LGBT Supplier Diversity at IBM. Not only was he the first person to hold the position at IBM, but he was also tasked with creating the nation’s first LGBT supplier diversity program, period. One of Drucker’s first missions was to find LGBT-owned businesses that could potentially become IBM suppliers.

“My sole responsibility at IBM at that time was LGBT supplier diversity. We were the first ones to do it, and there weren’t many resources available to me in which to find LGBT businesses,” Drucker says. “Most of those that were visible didn’t sell goods and services that IBM was looking to buy. In my heart of hearts, I know that they were there. Why would there not have been LGBT computer programmers or construction engineers? But I couldn’t find them.”

To find these LGBT-owned businesses, Drucker pioneered IBM’s LGBT supplier diversity outreach and spearheaded their mentor program — providing opportunities for LGBT business owners to connect with procurement professionals as well as other diverse professionals. He also made a crucial contribution to what would become the NGLCC, the National LGBT Chamber of Commerce.

Drucker became involved with the NGLCC shortly after it was founded, serving as an early adviser and influencer to co-founders Justin Nelson and Chance Mitchell. It was Drucker’s insight and guidance that transformed the mission of NGLCC from a traditional chamber of commerce model to an organization dedicated to championing supplier diversity and LGBT business success.

“I wanted LGBT business owners to stand up and be counted, to get certified and compete for contracts with major corporations,” Drucker says. “Justin and Chance were focused on attracting small businesses as their members in the beginning, and on doing traditional chamber of commerce things like providing discounts on various items to their members and providing them with networking opportunities. But when they realized how much opportunity there was for them as an organization and for small businesses to work with corporations, they shifted their focus.”

Currently, NGLCC boasts more than 1,000 certified LGBTBE members and is the only nationally-recognized third-party certification entity for LGBT-owned businesses. IBM, at Drucker’s urging, was the organization’s first founding corporate partner.

“Initially it was very difficult for me to accept that I had played as significant a role as I now realize I did,” he says. “I was just doing my job of bringing people together. When I received the Advocate of the Year Award, I didn’t know that they were going to be giving that award – it was the first time they did it – and I was quite shocked when they told me ahead of time that I would be receiving it. While I waited to give my acceptance speech, someone told me, ‘None of us would be here tonight if it were not for you.’ I poo-pooed it then; so many people had worked so very hard for the success of the organization.”

It wasn’t until 10 years later when Drucker was honored with the NGLCC Legacy Award, that he began to grasp the significance of his contribution.

“It wasn’t until I received the Legacy Award and looking back over 15 years of the organization that I was able to see more clearly what I helped build and achieve,” he says.

This year, Drucker was named one of BEQ Pride’s 50 Legacy Leaders Over 50 in honor of his transformative work within the LGBT business community.

Drucker left IBM in May of 2012, after devoting 13 years to developing and growing the LGBT Supplier Diversity Program. The relationships he made and the skills he built during those early years have been pivotal to his continued success.

It was at the 2018 NGLCC national conference in Philadelphia that Drucker’s next mission arose. What started as helping two friends lead to Drucker launching Diversitas — a consulting firm that assists small- to medium-sized businesses that are certified as diverse-owned and operated by either NGLCC, NMSDC, WBENC, DiverseIN or other similar entities effectively leverage the advantages of certification to achieve business success.

“It started as me helping my friend, Chris Dunham, and his business partner Joseph Dominguez, owners of Dunham Insurance, an LGBTBE,” Drucker said. “They were certified but didn’t know how to leverage that certification in corporate America. We attended the NGLCC Conference together in Philadelphia where I was able to connect them with the right people to talk to about their business. I left the conference with two additional clients in the works. I now represent 12 certified diverse-owned businesses with more signing on every month.”

Through Diversitas, Drucker offers a wide range of services to assist LGBTBEs in connecting with the right people at their target enterprise, and have the optimal pitch and business plan ready to land a contract. Diversitas also offers consulting services to create a supplier diversity program for the first time or refine an existing program, help establish a sourcing strategy and assistance creating a unique compliance program to meet a company’s specific needs.

“Having chaired the NGLCC’s Procurement and Corporate Advisory Councils, as well as having served on NMSDC’s International Committee and WBENC’s Global Planning Committee, I have established and maintained an unrivaled network of contacts within the community of Fortune 500 supplier diversity professionals,” Drucker says. “I put those contacts to work for my clients, getting them the face-time they need with decision-makers in the supply chain at potential Fortune 500 customers.”

Drucker’s reputation as a dedicated advocate for supplier diversity is known and admired by colleagues and peers, from small businesses to corporate entities.

“There is no advocate for diverse business growth in America more passionate, dedicated and far-sighted than Irwin Drucker,” said Bob Witeck, president of Witeck Communications, a certified LGBTBE. “His historic role in helping fuel LGBTQ businesses and fostering the mission of the NGLCC will make Diversitas an indispensable partner for many emerging businesses.”

“Irwin is one of the most positive, upbeat people I know,” said Todd Rice, manager of the Procurement STAR Team for American Airlines. “His passion and dedication to diversity are unparalleled. He truly does ‘walk the walk’.”

Over the years Drucker has witnessed the changes and growth in supplier diversity firsthand — spearheading many of the significant advancements within the LGBT business space. Recently, he was able to experience what he describes as “the closing of a great circle” when Diversitas earned LGBTBE certification.

“For me, the certification of Diversitas as an LGBTBE by the NGLCC, on February 28, 2019 — my 60th birthday no less —truly represents the closing of a great circle,” Drucker says. “Never did I think back in 1999, when I created the program at IBM, that one day I would own a company that could be certified and become a part of the diverse supply chain of so many amazing companies.”

Even as an entrepreneur, Drucker continues to work on behalf of the LGBT business community. Through Diversitas, he created a “scholarship” program. Each time he is hired for a consulting engagement by a Fortune 500 company, he will collaborate with the leadership team at NGLCC to select a recently certified LGBTBE to receive the benefit of his consulting services, at no charge, for up to a year.

After nearly two decades of transforming LGBT supplier diversity, Drucker shows no signs of slowing down in his mission to facilitate business success.

Read about how Diversitas helped Havens & Company, a WBE, leverage their certification for growth here. Learn more about Diversitas at mydiversitas.com.