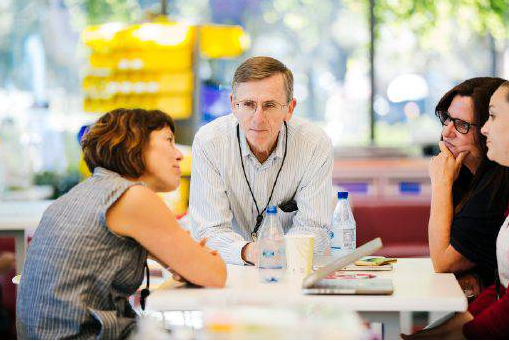 Before her first New York work meeting after getting married, Beth Parker was presented with a wedding present from a managing director. The moment, of course, led to questions about the wedding.

Parker, public relations director  at PricewaterhouseCoopers in Washington, D.C., was a little surprised, but gladly filled the 12 attendees—half strangers to her—in on the details. She credits the Stanford LGBTQ Executive Leadership Program with helping her feel comfortable in the situation.

“I’ve always been out at work, but I think Stanford helped me to embrace the idea of not just being out, but being visible,” said Parker, who wed her partner of 17 years in January. “I think I now have an elevated comfort level, and that’s just a perfect example of it.”

Stanford’s weeklong leadership boot camp is reportedly the first of its kind in the U.S. to cater specifically to high-potential leaders who identify as lesbian, gay, bisexual, transgender or queer.

The $12,000 program’s second session July 30-Aug. 4 will welcome about 45 students to Stanford’s Graduate School of Business.

Program co-directors Sarah Soule and Thomas Wurster designed it to help more LGBT leaders ascend to the C-suite, among other reasons.

“All sorts of research promotes the premise that diversity is a benefit to effective organization and leadership,” said Wurster, a Management lecturer at Stanford. “In a hard-nosed business sense, it makes a difference and produces better outcomes.”

Soule, a professor of Organizational Behavior,  says the program aligns with the mantra already in place at Stanford’s Graduate School of Business: “change people, change organizations and change the world.”

“We believe we can do this by training leaders,” she said, adding that in her course students use design thinking to tackle issues of diversity and creating inclusive work places for LGBTQ people.

The co-directors explained that every class—taught by them and other GSB faculty—is run through the filter of leadership development and identity.

“LGBTQ leaders face many of the same challenges faced by other high-performance leadership groups, so the power of the program is, ultimately, seeing these challenges in the context of LGBTQ identity,” Wurster said.

Looking back on the inaugural session, Soule and Wurster believe one of the biggest examples of its success is how the participants still interact with each other regularly.

The first-year class even created a scholarship fund to help one or two possible participants who for whatever reason couldn’t raise tuition to enroll. That pay-it-forward attitude demonstrates the program’s success, Wurster said.

“I think, to a person, people have walked away from this program and said, ‘Gosh, I now have this network,’” he said. “And it’s a network of people going through similar points in their career trajectory with whom they can talk in a way that might be more difficult within their own individual company setting.
“In some ways, the power of the network is a core premise behind the program itself.”

Soule said they are planning to extend that network at the second session by inviting last year’s participants to a reception to welcome the new class to the program.

Parker, who was part of that inaugural class, plans to attend not only to meet the new class but to get together with her classmate whom she communicates with regularly.

She said she uses lessons she learned during the program—from executive presence to brainstorming techniques—on a daily basis. The biggest benefit for her, again, has been her knew understanding of her role as an LGBTQ leader. “It was transformative for me because it was sort of an awakening,” she said. “I became keenly aware of the responsibility that I have to other people in the LGBTQ community. It made me want to mentor people, it made me want to lead more in that space and be more visible.”