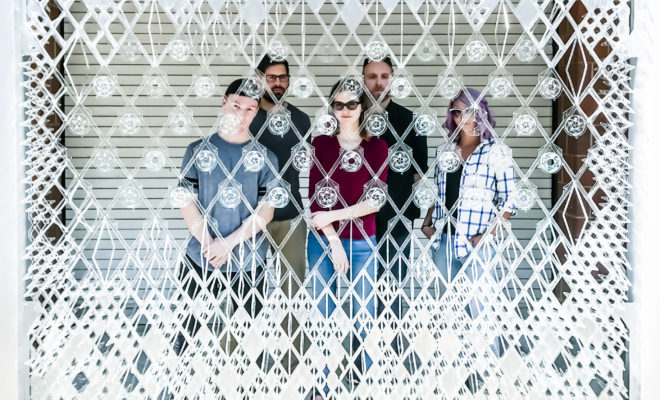 When a group of students and Faculty from University of North Carolina at Charlotte’s School of Architecture won a national award for their design for a proposed sculpture commemorating the victims of the mass shooting at Pulse night club in Orlando during PRIDE 2016, they had little time to celebrate. In winning the award they were tasked with bringing their design to life.

Assistant Professors Marc Manack and Rachel Dickey, students Claire Shue (second year) and Jonathon Warner (third year), and McKenzie Canaday and Alex Cabral from the school’s fabrication lab worked tirelessly to build the sculpture. They met with unexpected challenges along the way, ultimately adapting their original design to better fit time and budget constraints. The result is an interactive piece, “Effervesce”, that invites people to reflect on the tragedy while connecting with other humans. Here’s their story.

BEQ Pride: What was this piece for—a competition? Class project?

Cabral: We created the piece for the American Institute of Architect’s annual convention, held in Orlando, Florida this year. A group called AIA Small Project Practitioners delivered a competition prompt for designs dealing with the theme of “Reflection”. We were to think about “social interaction, moments of reflection, and instances of joy”. It also had to fit within a booth at the competition’s site, the Orange County Convention Center.

BEQ: Can you describe the sculpture for us?

Shue: The sculpture consists of aluminum, acrylic, bubble soap and human interaction. The bubble wall sits in an aluminum frame that suspends the bubble wall in the middle. The main part is made of two layers of acrylic sandwiching two pieces of aluminum that appear to fade away from the middle. The 720 unique pieces that stick out from the wall create an ethereal quality. It creates a wave of dematerialization that makes the wall appear to both be there and not be there.

Warner: The design begins to relate ideas of both death and memory through a way of reflecting on the lives of the Pulse night club victims. One approaches the wall and pulls the pump, drawing bubble soap from a bottle etched with the name of each person who died. Then they open the iris and blow a bubble, recreating that person’s life through a beautiful but playful means. It was really important to our design team that when someone interacts with this wall, they feel a personal connection to each of the people that died in the shooting.

BEQ: Why did you choose to honor the Pulse night club victims?

Cabral: For us, it was an obvious direction given the location of the convention and desire to see our work impact a larger community beyond the few days that the AIA was in town. We believe that the celebration of the 49 lives lost that night was important to highlight in our work. It began to drive our design decisions early in the process.

Shue: We wanted the memorial to create a sense of community and human interaction while also memorializing the largest mass shooting in United States history. The LGBTQ+ community has experienced so much loss; we wanted to create a safe place where people could come to mourn but also interact with their fellow man.

Warner: As a member of the LGBTQ+ community myself, this project was more than just a memorial from my perspective. Its design is a constant reminder that the LGBTQ+ community is always there to support struggles that anyone may have, especially death and discrimination.

BEQ: The sculpture is called “Effervesce” and produces bubbles which is a positive, uplifting image. What do you want people to feel when they see and interact with it?

Warner: I think that what people feel when they interact with this memorial is dependent on their relationship with the piece and with the LGBTQ+ community. I think that keeping the idea playful and positive brings an uplifting mood to all ages, genders and sexual orientations. The beautiful thing about art and architecture is the openness to interpretation. Just like any piece, I think this memorial could have many emotions tied to it depending on the person.

Cabral: We did not want to memorialize the lives of these people in a traditional sense, but we did want to celebrate their lives and the reasons for them being out that night. They were out to enjoy themselves and experience instances of joy with one another. We felt that the interaction would create intimate moments of people coming face-to-face with others while blowing bubbles. We want people to feel the simple enjoyment of blowing a bubble while also recognizing the larger tragedy through a positive, uplifting experience.

Shue: When we first realized the piece at the AIA conference in Orlando, it was the first time we had the opportunity to watch people interacting with the wall. People showed a lot of emotion during their experience around and approaching the wall. They were curious about how it works, then intrigued by the bubble mechanisms and finally empathetic at discovering the purpose of the memorial and the names etched on the bottles. 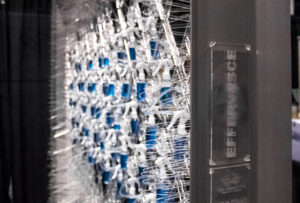 BEQ: You won a national award for the design, then you were tasked with actually building the sculpture. What are some of the challenges of bringing your design to life? How did you feel when it was completed and functioning?

Shue: The team found out we won in early March, and needed to be finished by the end of April. We realized rather quickly that the original design for the wall would be too expensive and time-consuming for the time we had to build it.

We went through a couple of trials and errors before getting to the design that would become the finished product. The team created the pieces and the wall with computer generated forms used to create the fabrication files, then used to laser cut the prototype in the School of Architecture Fabrication Labs. The people at Iconix Metal Works cut the actual pieces for the wall. The speed and craftsmanship that we could achieve there was greater than we could produce in house.

Cabral: The challenges with building any project is in the realization of idea from paper to reality. For us it was an interesting learning experience of how to collaborate with fabricators and stay close to the budget allotted for the project. There was always an effort to ensure we did not lose the essence of project; therefore partnering with Iconix Metal Works to execute the fabricating of the project was essential.

Once completed there was a great sigh of relief and awe that what we had spent so much time imagining was finally real; and to an incredible degree of clarity and precision. Of course, then we had to transport it from Charlotte to Orlando…

Warner: After construction, we wiped the sweat off our foreheads and saw an absolutely stunning product. I am extremely proud of the message and design we brought forth.

BEQ: Where can we see the sculpture in action?

Cabral: At the moment the piece is in Charlotte, but the final placement will be a permanent installation at  The Center in Orlando. We hope that the Orlando community accepts this piece and can find enjoyment, reflection and solace in our work.