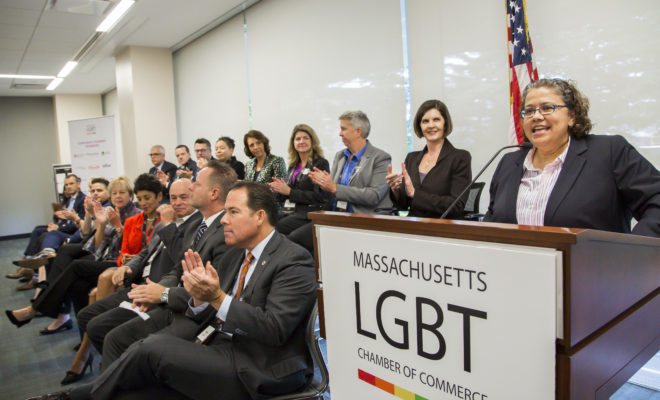 A New Day for Massachusetts LGBT Chamber of Commerce

In September 2018, the Massachusetts LGBT Chamber of Commerce officially launched, heralding a new beginning for the state’s LGBT business owners.

Although it follows in the footsteps of the pioneering Greater Boston Business Council, which closed in March 2016, the MA LGBTCC is a new organization, “built from scratch”, says Grace Moreno, executive director. The MA LGBTCC is focused primarily on business growth and economic equality for the LGBTQ community, a purpose made possible by the work done by the earlier organization.

“The group that came before this one took on some big, ugly issues. And they did it at a time when corporations weren’t really talking about LGBT inclusion,” Moreno says. “We get to start with the focus of business because some of those fights have already been fought for us.”

Massachusetts sees about $280 billion in business revenue each year, and the MA LGBTCC intends to maximize how much of that revenue goes to LGBT-owned businesses.

“We want to put more funds in the pockets of LGBT-owned businesses and LGBT people,” Moreno says.

After leaving her job at Prudential Financial, Moreno became involved with non-profit organizations and soon realized she had a passion for helping others. With more than 25 years of experience leading state and national nonprofit organizations, Moreno brought her skills and expertise to founding the MA LGBTCC.

“There’s an amazing opportunity here, so having all of the various experiences I’ve had – corporate, entrepreneur, non-profit, fundraising – made it so that I could get bold,” she says.

And bold she is. The team at the MA LGBTCC hit the ground running thanks to the support of corporations eager to work with LGBT-owned businesses. Before officially launching, the organization signed 18 corporate sponsors, almost double the number needed to get started, thanks to Moreno’s organizational skills and the strong leadership of four founding board members who range from senior corporate executives to small business owners: Executive & Entrepreneur Coach at InnerOvation, James Lopata; Principle of Tomo360 Susu Wong; Karen Young, Vice President & Chief Inclusion Officer at Harvard Pilgrim and Nancy Stager, Executive Vice President of Human Resources & Charitable Giving at Eastern Bank.

“We needed 10 corporate sponsors to launch and we got 18,” Moreno says. “I think we’ll have close to 25 by end of the year. Corporations were excited and are saying, ‘Where is the LGBT talent? Where are the LGBT businesses? How can work with them?’”

Moreno and her team are working closely with their corporate roundtable to develop initiatives to exceed the national standards of inclusiveness, to connect LGBT-owned businesses with large contracts and to help smaller entrepreneurs gain access the right programs to grow and succeed.

The organization is also partnering with Babson College on an intensive entrepreneurship program for business owners who have never been to business school. Moving outward from Boston, the MA LGBTCC is connecting with Provincetown, where tourism reigns and business is steady for just three months out of the year. The Chamber is looking at how to shore up the tourism industry and expand economic opportunities in that community. They are also working in cities like Springfield and Holyoke to make sure that the chamber reaches all the corners of the commonwealth and brings opportunities to as many LGBT owned business and allied corporations as possible.

A culture of inclusion

“The North has always been more liberal on these issues. One of the reasons I moved to MA and Boston, in particular, is because you have an educated mentality here,” Moreno says. “Even though some would say that Boston is quite segregated and still has a lot of work to do in race issues, equality and inclusion is something we at least talk about here and there is a genuine desire to get it right. People in MA are just a little more innovative and open-minded.”

Moreno also credits MA Governor Charlie Baker with leading the way in the state’s progressive inclusion efforts. Governor Baker, a Republican, was the first governor in the country to sign an executive order allowing certified LGBT-owned businesses to bid on state contracts under the supplier diversity program.

“This is a governor who is very business focused,” Moreno says. “He’s looking at this from the business perspective. He’s not leaving any group out of the equation.”

MA LGBTCC is focused on business equality, but Moreno knows that there are still battles to be fought in other arenas. She identifies the next big issue to be supporting LGBT seniors. As the Boomers age, the strain on our country’s elder care infrastructure is showing weaknesses for all, but especially the LGBT community. From the aging and death of their support networks to experiencing social stigma to wide-ranging discrimination, many are forced to hide their authentic selves just to receive basic needs.

Another area where Moreno wants to focus is with the transgender community. “In our LGBT acronym the most disenfranchised are our transgender brothers and sisters, we owe it to them to stand strong with them and make sure they are treated fairly and are allowed to play in the ballgame that is business.”

Learn more about the Massachusetts LGBT Chamber of Commerce at malgbtcc.org.