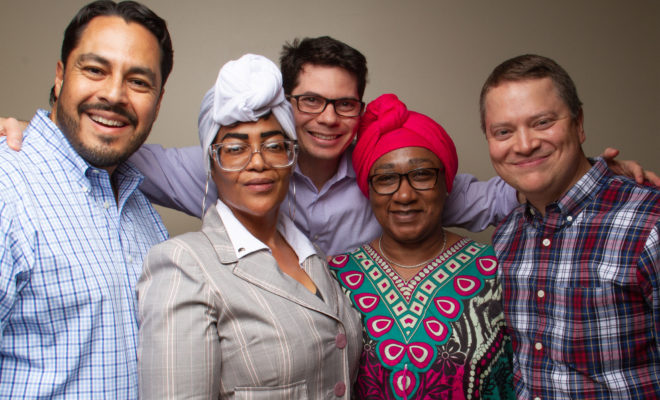 On a sunny summer morning in New Jersey, a woman logs into a video meeting platform on her computer and begins a conversation with a businesswoman in Brazil where winter approaches.

Virtual meetings have long been utilized by colleagues across the globe, and as public spaces closed to slow the spread of the novel coronavirus, 2020 saw a sharp rise in video meetings of all kinds – professional, medical, social and educational. Today’s conversation falls in the latter category. The women are conversing as part of a tutoring curriculum created and delivered by Soulphia, an English as a Second Language (ESL) learning platform that connects tutors and students across continents.

In 2018, the British Council forecasted that two billion people would be speaking English – or learning to speak English – by 2020. Learning the language is increasingly vital in our global society and marketplace. English is used by “the economically active, the thought leaders, the business decision-makers, the young, the movers and shakers present and future,” the British Council asserts.

Soulphia is the brainchild of Felipe Marinho and Tiago Noel Souza, both Brazilian immigrants with firsthand experience of learning English as a second (or third) language. They saw how English language fluency directly impacted an individual’s upward mobility and economic empowerment.

“We know the struggles,” Marinho said. “We struggled to learn the language, the culture, the habits, how to interact – we’ve been there.”

But Marinho and Souza wanted to find a way to deliver this needed service in a way that also reflected their core values. Both are committed to breaking down social and economic barriers by enhancing communication. The duo spent many hours volunteering in homeless shelters and with Habitat for Humanity in the tri-state area. It was there that the idea for Soulphia was planted.

“We began to think about how we could create a sustainable change in the lives of economically-challenged people in the United States,” Marinho said. “As Bono, the lead singer of U2, said, ‘Aid is just a stopgap. Commerce [and] entrepreneurial capitalism take more people out of poverty than aid.’”

What if, they thought, we trained homeless native English speakers in the US as ESL tutors? What if we developed this latent potential, these people with skills and knowledge not just of the English language but US culture and community? What if they could advance English fluency while fostering development of the potential in underprivileged communities?

Marinho had previously met Rafael Borja, a Mexican immigrant, at Columbia Business School’s Advanced Management Program and got him on board. They took the idea to the Columbia Entrepreneurship Lab where mentors helped develop and refine the idea into a business model with an added social benefit.

After officially launching the platform, Soulphia expanded to partnering with homeless shelters in Jersey City. To date, the company has trained 50 tutors, primarily homeless women, who have leveraged their native skills to improve their economic situation.

“Soulphia has given me great opportunities to grow and to move forward at a particular time in my life when I was most vulnerable,” says Kymalekah Devine, a tutor and board member of Soulphia. 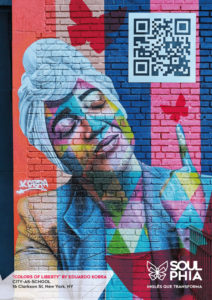 Devine, who suffers from a seizure disorder, was living in a homeless shelter when she met Morinho. At the time her speech and memory were compromised, due to her medical issues, but Morinho saw the hidden potential.

“I taught English in Japan years and years ago,” Devine said. “Soulphia gave me an opportunity to use that experience, training me to be a tutor and earn supplemental income. I’m at a loss for words to describe my gratitude.”

Devine noted that Soulphia is particularly mindful of women’s needs and concerns in the workforce.

“Soulphia was created to benefit women particularly because they realized that men – even in the vulnerable situation of homelessness – they can always run out and get a job, maybe just something in construction. Jobs for them are more readily available. With women, we have children and other things that we always consider before we take that step for a job. So to be able to have an opportunity to work from home, and the provisions that they were able to give us with the computers and bringing students to us, it was awesome.”

Devine also received an unexpected benefit of becoming a Soulphia tutor: she is the subject of a mural painted by Brazilian street artist Eduardo Kobra. The work is one of 18 murals Kobra painted throughout New York City for his project, “Colors of Liberty,” a series of powerful images about the universal message of promoting peace.

“Tiago was able to connect me with an opportunity to work with a gentleman by the name of Eduardo Kobra,” Devine said. “He’s a world-famous artist and I ended up becoming a personal tutor for him and his wife. And, without my knowledge, I had no idea that they were going to do a mural of me.”

Soulphia is an exclusively online learning platform inspired by Netflix and Amazon Prime Video. When a student joins, they take a placement test to evaluate their level of English language proficiency. Based on their individual results, the platform recommends content to increase proficiency.

But Soulphia wants to offer more than generic language instruction. The company partnered with Educurious, a non-profit corporation dedicated to developing educational content that inspires and empowers. Together they developed culturally-rich materials that go beyond “textbook English” to help students grasp nuances of conversation and culture.

In just over two years since moving Soulphia from the pilot stage to full-fledged startup, more than 2,200 students have participated in classes carefully designed to provide practical language instruction.

“The student is able to determine their own path inside our platform at their own pace,” Marinho said. “Constant interaction with our purpose-driven tutors has resulted in above-average student experience compared to other platforms.”

A Plan for Growth

The demand for online courses has increased substantially during the COVID-19 crises, Marinho reported. An expansion plan was already in the works, but increased demand has company leaders ready to scale and create more jobs. Currently, Soulphia is planning to focus on expanding into several countries in Latin America as well as its US student base (the US ranks as the second-largest ESL market in the world).

“We are planning to expand our product offering to specifically address the immigrant’s journey in the US,” Borja said. “By rolling out a more mature Soulphia in the USA market, we aspire to create another virtuous cycle by oiling America’s centuries-old melting pot.”

Small businesses like Soulphia sit at the nexus of business, government and society – they are not only the backbone of long-term economic growth but also the platforms for it. They are on the ground, doing real things, creating practical value to meet unmet needs. In the process, they are revealing and delivering on the value of the diversity of our world when and where it needs it most.

And it all starts with a conversation between two people on opposite sides of the world.