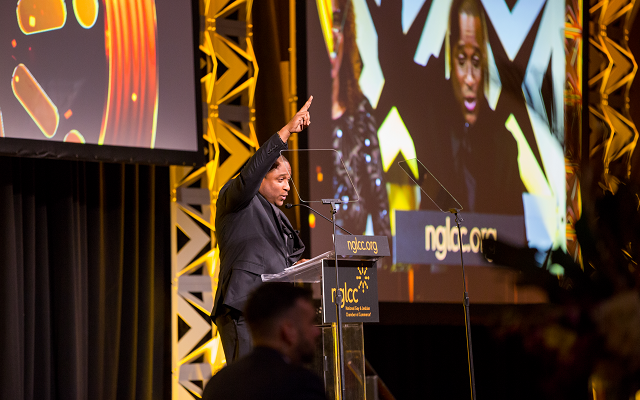 Rondu Vincent, Director of Supplier Diversity in the Global Procurement organization at Bristol-Myers Squibb, did an impromptu dance on his way to the podium after he was named 2016 Supplier Diversity Advocate of the Year by the National Gay & Lesbian Chamber of Commerce.

“This is like the Oscar for a Supplier Diversity professional,” he said. “To be in that fraternity now, it’s amazing.”

Entering the rarefied company of NGLCC Advocate of the Year awardees is well-deserved for the man who has spent more than a decade leading corporations in their supplier diversity efforts. Although relatively new to Bristol-Myers Squibb, Rondu has over 19 years of strategic sourcing experience and more than 10 years of direct supplier diversity experience. Prior to joining Bristol-Myers Squibb in 2014, he was the Director of Supplier Diversity at Pfizer, and held leadership positions at other major corporations.

During his first full year at Bristol-Myers Squibb, Rondu grew the company’s overall diverse spend and advocated for greater inclusion of LGBT-owned businesses within the supply chain. He has also inspired the Global Procurement team and others to embrace supplier diversity as a core business strategy and standard business practice company-wide. Under Rondu’s leadership, the results for 2015 are outstanding, and as of press time the company is on track to exceed its 2016 supplier diversity goals and objectives.

“I don’t think I’ve met a person who is more committed and passionate than Rondu,” said Tarrance Frierson, Manager, Supplier Diversity. “It’s not just giving sound bites or lip service. If he says he’s going to do it, then he does it. That takes real leadership, commitment and passion.”

When Elise Lindborg, Top Dog of Zippy Dogs, was first introduced to Rondu in a chance meeting, he was already aware of her company and immediately had an opportunity for her. Since then Zippy Dogs has worked on several large projects for Bristol-Myers Squibb, transforming the company and its future.

“I can’t tell you how much Rondu means to our business,” she said. “We’re small but to get the recognition from Bristol-Myers Squibb and from Rondu, it’s been huge for us.”

Spend is just one metric Bristol-Myers Squibb uses to measure supplier diversity results. Adherence to regulations and establishing proven processes is key to the growth of a supplier diversity initiative, but Rondu goes a step further, moving beyond providing access to opportunities and into true advocacy. The company actively engages in strong partnerships with multiple advocacy organizations and recently began branching out into community impact.

Rondu manages the company’s partnerships with more than 25 small and diverse business advocacy groups, Chambers of Commerce, councils and others. In addition, he serves on five Boards and various committees of strategic partner organizations and serves on the NGLCC Mentoring committee, where he is currently mentoring five LGBTBEs. Bristol-Myers Squibb was a co-presenting partner at the 2016 NGLCC national conference in August, and Rondu was actively engaged with conference programming efforts.

During 2016 Bristol-Myers Squibb launched the Power to Impact Communities initiative to increase supplier diversity community touchpoints by actively engaging the local diverse community near conference locations. As part of the initiative, Rondu’s team hosted a community action event in Southern California at the Los Angeles LGBT Center ahead of the 2016 NGLCC International Business & Leadership Conference to inspire the next generation of LGBT entrepreneurs. This unique event brought LGBT business owners and corporate professionals as well as personnel from Bristol-Myers Squibb together with young LGBT professionals through a networking mixer and panel discussion.

Bristol-Myers Squibb understands the ripple effect of the dollars spent with small businesses can have. The legacy-effect adds a wealth-building factor to the community, helps to create jobs and more importantly changes lives.

“BMS is doing some innovative things with diversity and trying to drive the conversation about valuing LGBT suppliers in the sourcing and procurement function,” Jennifer Brown of Jennifer Brown Consulting told the audience. “This is kind of a new conversation. Landing gigs with companies like Bristol-Myers Squibb really helps small companies grow to become multi-million dollar companies.”

James Nowlin, CEO of Excel Global Partners, knows firsthand how a company providing an opportunity to a small business can change its trajectory.

“I grew up as a country boy in Virginia,” James Nowlin, CEO of Excel Global Partners shared. “When I was growing up I certainly didn’t see anybody who was black or was gay in business at a high level of success. I founded Excel Global Partners during the Great Recession and at one point I was close to being homeless. I cold called every business in the phone book and finally someone said, ‘We want to talk to you.’ That was the beginning. Now we work with clients from million-dollar start-ups to multi-billion dollar corporations like General Electric and General Motors.”

The company followed with a similar event focused on ethnically diverse youth in Chicago ahead of the National Minority Supplier Diversity Council’s annual conference in October. These inaugural Power to Impact Communities events were widely praised by participants, and they’re just a taste of what’s to come.

With his commitment to supplier opportunity, access, development and community impact generating extraordinary results, it’s no wonder Rondu is joyful.