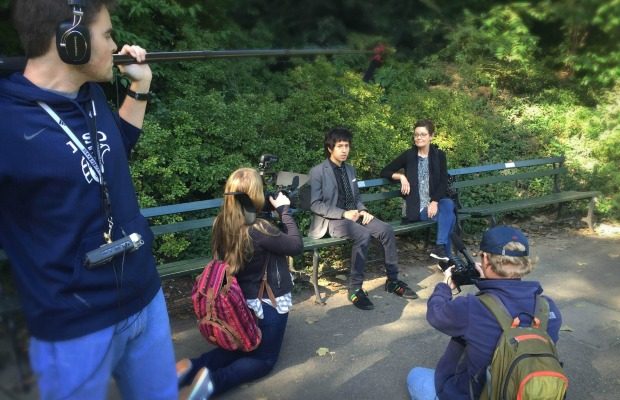 AT&T and the Tyler Clementi Foundation have powerful new weapons in their efforts to stop cyberbullying: the award-winning films created by students for the first ever Cyberbullying Film Invitational.

The three-day event, part of the 2016 All American High School Film Festival, challenged students from 24 schools nationwide to travel to New York City, where they wrote, directed, filmed and edited their 8-minute films that explore the cyberbullying theme. The winning films were announced Oct. 9 at the Teen Indie Awards in New York City.

The first place winner, “gr@vity,” tells the story of a teen who is cyberbullied after compromising photos of her are put online. The film, created by Steilacoom (Wash.) High School students, ends with a scrolling list of dozens of young people who took their own lives as a result of cyberbullying.

That roll call of names is devastating,” said Neil Giacobbi, AT&T Public Affairs. “What a waste; how unnecessary that something as seemingly innocent as a smart phone and social media can cause such destruction.

We want to do something about it, and help kids understand how to survive the online environment.”

Much like its “It Can Wait” campaign to end distracted driving, AT&T has made addressing the rise of cyberbullying a priority.

According to stopbullying.gov, young people who are cyberbullied are more likely to experience in-person bullying and skip school. They also likely will have poor grades, low self-esteem and more health problems.

Jane Clementi knows all too well the tragic results of cyberbullying. In 2010, her son Tyler committed suicide after his Rutgers University roommate cyberbullied him.

The organization she co-founded in her son’s name works to end online and offline bullying, making its partnership with AT&T on the film festival “a win for us.”

To show and teach young people how to use their technology properly to build people up as opposed to tearing them down and using it as weapon of bullying is a perfect mix for all of us,” she said. “I am grateful for AT&T and the All American High School Film Festival.”

While she had difficulty watching some of the films, Clementi said, she was astounded by their quality and the talents of the high school filmmakers.

They were amazing,” she said, adding that the difficult subject matter makes a bigger impact when you consider the films were made by high school students. “It’s nothing that they haven’t talked about or seen or read about or, sadly, had similar personal experiences.”

According to recent studies, cyberbullying has reached epic proportions. A risk behavior study by the Centers for Disease Control found that 15 percent of high school students were electronically bullied in 2012. That study was designed to be representative of students in grades 9-12 attending U.S. high schools.

AT&T, working with the Tyler Clementi Foundation, commissioned a poll of 500 teens and 500 parents in the New York City metro area. The poll, conducted in March, found that nearly half of the teens were victims of cyberbullying, while 80 percent said they know someone who has experienced cyberbullying.

The cyberbullying films, which have been shown at assemblies in New York state and can be seen online at the AAHSFF website, already are helping fight the problem, Giacobbi said.

Parents and educators have reacted strongly to AT&T’s cyberbullying campaign,” he said. “For parents the films reveal a world of negativity online they weren’t aware of, and for educators, AT&T’s campaign answers their call for help addressing what they describe as an epidemic and sadly, an everyday part of life for middle and high school students. We’re learning that bridging this gap between parents and educators may be the most effective use of the cyberbullying films.”

The films will reach larger audiences early next year.

In February, AT&T will make a 20- to 30-minute cyberbullying film that contains parts of all the festival winners available to schools and youth organizations across the country to aid in their anti-cyberbullying programs.

AT&T’s cyberbullying campaign will continue at Fullscreen, digital video subscription service aimed at the teen and young adult audience. The team from Pine Crest School in Fort Lauderdale, Fla., was awarded a $25,000 deal to create a series on cyberbullying exclusively for Fullscreen.

Eventually, all the winning films will be available at Fullscreen and AT&T Digital You.