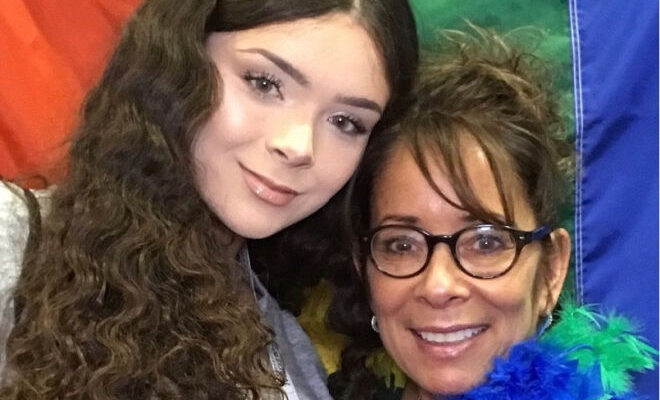 Irene Brank: “I didn’t know what the ‘T’ was for in LGBTQ”

When it comes to advocacy, Irene Brank (she/her) is a powerhouse.

A self-described storyteller, Brank specializes in transgender education, transition at work consultations and leading gender transitions in the workplace. Brank leads a Learning and Performance Team at MassMutual®, where she is also the Transgender Liaison and Gender Transition Partner for the company’s Pride Resource Group.

Her role as a consultant and storyteller has connected her with people across the United States, helping parents better advocate for their children, helping adults transition in the workplace and creating a culture of support and inclusivity that other organizations and corporations hope to emulate.

“This is really my true passion,” Brank said. “I love my day job. My work with Pride is what gets me to work every day. It’s just very, very fulfilling work.”

But the mother of three says she didn’t know what “transgender” really meant until six years ago.

“I honestly did not know what the ‘T’ was in LGBT until my daughter came to me and said the six words that changed my life, which were, ‘Mom, I’m not gay. I’m transgender,’” Brank recalled.

Brank grew up in central Massachusetts with two siblings, a brother and a sister. The daughter of immigrants — her father was from China and her mother from Switzerland — Brank said she had an interesting and culturally diverse childhood up until she began attending school.

“I had a brother and a sister, but no other relatives. The people I saw as a very young child — some of them wore turbans, some spoke German and some were Japanese, some were people of color,” she said. “I thought that’s what the whole world looked like when I was really little. I didn’t know that everybody didn’t look that way.”

Once she entered the central Massachusetts school system, Brank said she and her siblings were the only kids that looked like them. She came to the startling realization that the world would not always view her or her family the way she did.

Her worldview took another huge turn as an adult. Married with three children, Brank knew her third child was different, special. Samantha was the baby of the family, eight and a half years younger than the next closest sibling. Brank said her youngest always got a little extra attention. They were close.

“I always knew there was something different about this child, and I knew that I was going to have to be there for whatever it was,” she said. “I always knew she was bullied. From the very, very beginning, she was a very abstract thinker. I just knew that she needed more of me, so we have always been very close.”

Still, when Samantha told her mother that she was transgender, Brank said she did not react well.

“I literally said, the worst thing I could have said to her. I said, ‘Can’t you just be gay? It would be so much easier, for me,’” she said.

Looking back now, Brank knows Sam’s journey was never going to be easy. And it was certainly never about what was going to be easy for her as a mother. Brank said she kept the information to herself for months, not even telling her husband — something she now regrets. She found Sam a gender therapist on her own. The therapist confirmed a strong diagnosis of gender dysphoria. Brank found support with strangers in Mass Mutual’s Pride group, which she had already joined as a member when Sam had come out as gay a few months earlier.

With that support, Brank came to another startling realization: If as a mother of a trans daughter she was feeling alone, what if there was someone in the company who wanted to transition and felt they couldn’t?

“At MassMutual®, we used to have community through storytelling events, and you could go to HR and say, ‘I have a story that I want to tell,’” she said. “I thought, ‘I’m gonna do it right. I have to get this out there.’”

Brank scheduled a talk she called “Saying Goodbye to Samuel and Hello to Samantha”. She hoped to have as many as 25 people attend.

“We had 350 people show up for that talk,” she said. Brank received hundreds of emails from other parents. And one email from someone who was struggling with their transition. The pair started a friendship, which sparked Brank’s work with gender transition in the workplace. Two years ago, her friend came to work for the first time as her true self.

“It’s where it started,” Brank said. “One day, I don’t know why, I just got it in the gut and said, ‘I can tell my story, I can do this.’ And the way it was received and the way I could change minds and make people think differently about my daughter’s community — it just blossomed from there.”

Brank is currently writing a book in the hopes of helping other parents better support their trans children through the transition process. It’s a resource she wishes she had when Samantha first came out. Working with a ghost writer, the book is told through Brank’s perspective as a mother, with Sam’s voice interwoven throughout.

It’s a hard book to edit, Brank said, because it’s like living through some of the hardest moments all over again. Brank is self-funding the book, engaging in a Kickstarter to defray part of the publishing costs.

It’s not about making money, she said.

“We will lose money. There’s no question about it,” she said. “For me, if one kid or parent picks up the book and reads it and knows they’re gonna be okay, then I’m good. That’s all that matters to me. It can be just one person that it makes a difference for. To me, it’s all worth it.”
And the apple didn’t fall far from the tree.

Samantha had turned to YouTube when she was exploring her gender identity as a teenager. It was while listening to an Ariana Grande song on YouTube that she realized she didn’t just like Ariana Grande’s music, she herself identified as a woman. She wanted to be like Ariana Grande.

Samantha started a channel under the name Samantha Lux to build community and create the content that she wished she had when she was going through those early days. She now has more than 300,000 subscribers. Her video, “Male to Female Transition. 1.5 year update” has been viewed more than 9 million times since it was first posted three years ago.

Samantha’s openness on social media has caused some anxiety for the family. Brank and her husband worry about keeping all of their children safe, but especially their youngest. When Samantha chose to go to college in Chicago, moving from a town of 8,000 people to a city halfway across the country, she had to build new relationships and support networks.

“You think about their futures and it’s just so overwhelming and so scary,” Brank said. “It was really hard. We cried a lot. We asked a lot of questions.”

Today, it’s easier. Samantha continues to create media for a living. She does keynote speaking events with her mother.

Brank has continued to develop programs and training courses to change people’s hearts and minds. To normalize her daughter’s community.

This article was updated on November 3, 2020, to clarify  Samantha’s job.