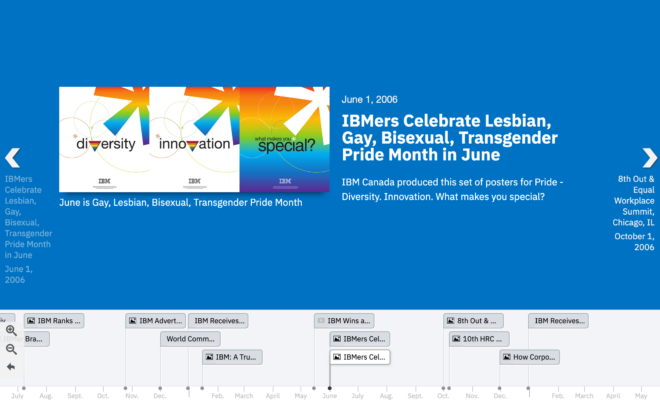 For decades, IBM has been at the forefront of change. From the establishment of their Equal-Opportunity Policy in 1953 to their public opposition to Texas’ “bathroom bills” in 2017, the company has routinely positioned itself as a champion for equality, diversity and inclusion.

In June, IBM launched their latest endeavor: their LGBT+ Timeline. Curated by Paul D. Carey and a technical team consisting of Francis Powlesland, Ashley Fenton and Mika Jugovich, the timeline, according to the corporate website, is “intended to share the bold, proud steps that our company has taken as we maintain this momentum moving into the future.”

Approximately two years ago, Carey, one of two remaining employees who were members of the original IBM Gay and Lesbian Task Force that was launched in 1995, noticed that documentation of the monumental shifts that IBM had made in this space weren’t easily accessible.

“It had become apparent over the past few years that a lot of the institutional knowledge of things we had and were doing weren’t documented,” noted Carey, a member of the mergers and acquisitions team who has been with the company since 1988. “I realized that when I or my colleague leaves, there would be no one left that really has much of that insight and background. I came up with the idea of creating this timeline to be able to capture that history.”

Initially, Carey’s vision was to digitally display some of the artifacts he had collected over the years. However, when he began the process, he realized the focus needed to be content-driven and brought together other IBMers from around the world to find more content. As part of their research, the team utilized a variety of sources to locate the pertinent information that was vital to telling the company’s story. Sources include Carey’s and other IBMers’ own files, the Internet, external organizations and the IBM Corporate Archive.

“It has actually gone from what I thought would be a small project of capturing a few things and putting them online to actually researching and re-creating pivotal points in our history,” said Carey.

The scrolling timeline features panels accompanied by an artifact (images, PDFs, and links to social media content) and the context of why it’s important to IBM’s progress. While the focus of this timeline is rooted in IBM’s commitment to the LGBT+ community, there are additional landmark moments that are highlighted such as the company’s establishment of a Minority Supplier Program in 1968 and advertisements in US Black Engineer and IT and Hispanic Engineer and IT Magazines in 1996. For the team, it was important to emphasize the company’s practice of inclusion that encompasses a wide range of populations.

“IBM has had his very long, rich tradition of setting an example and setting the bar,” stated Carey. “When IBM announced Domestic Partner Benefits in the United States, it was the largest company at the time to do so.”

Carey also defined the ongoing value of his project. “We share this timeline with our internal teams and external customers to not just talk about our LGBT+ programs, but to show how we’ve been committed to diversity and inclusion throughout our history. As we as a culture have modified and re-examined our own social institutions, IBM has come through on tough issues, never wavered in support for our employees and communities and has always been leading the way.”

Currently, the external timeline has more than 300 artifacts with content from more than 45 countries and is updated regularly. Even with the ongoing research, Carey feels a sense of accomplishment regarding what the team has achieved and is proud to work for a company where he feels valued.

“IBM has given me a lot of opportunities that I’ve been able to explore, allowing me to grow my own skills and career,” said Carey. “They’ve supported me in everything I’ve done.”

The IBM LGBT+ timeline can be found at ibm.biz/ibm-lgbt-timeline.