Nothing can make a cancer diagnosis easy, but the National LGBT Cancer Network found that one significant factor in helping people through it is support from friends, family and especially their caregivers. Such support can be more challenging to find for marginalized people, and multiple marginalizations make it even more difficult.

“OUT: The National Cancer Survey” was conducted between September 2020 and March 2021. The web-based survey, available in English or Spanish, was promoted via social media and through collaborations with community organizations. To gather data, the National LGBT Cancer Network asked questions about diagnosis, treatment, support, connectedness and more. In total, 2,728 LGBTQI+ survivors completed the survey, sharing their individual stories of cancer diagnosis, treatment and survivorship.

Multiple studies show a positive association between perceived social support and psychological adjustment following cancer treatment. Research findings suggest that the evidence for the relationship between social support and cancer progression is sufficiently strong. “The biggest, longest health study we have in the United States showed us that there’s one thing that’s more important for your long-term health than anything else. What is that one thing? It’s our relationships,” said National LGBT Cancer Network Executive Director Scout, Ph.D. (who goes by one name).

If social support and relationships are proven to be crucial to surviving cancer, then how does that translate for LGBTQI+ individuals, who are historically marginalized in healthcare? 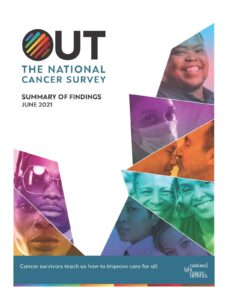 “Your emergency contact isn’t necessarily the person who supports you every single day,” said Dr. Don Dizon of Brown University, a medical oncologist who is gay himself. “We need to help clinicians understand the concept of tribe and get away from the idea that your spouse is the only person you will talk to.”

One of the greatest challenges for LGBTI+ individuals is identifying healthcare providers that are welcoming and inclusive, the study revealed. Considering the recent climate in the United States toward the LGBTQI+ community, outing oneself as part of a gender or sexual minority can be an added stressor on top of a cancer diagnosis.

Scout said the research team was pleasantly surprised to find that “many people were accessing better care, but [they] still don’t want the journey to be as rough or as long to get there.”

Eighty-nine percent of respondents described their cancer treatment experience as welcoming and most said their primary care providers and nurses offered culturally competent care. But welcoming care was not always easy to find. Eighty-eight percent of respondents said they witnessed no environmental indication of welcoming care at treatment centers, making it difficult for survivors to intentionally seek treatment from welcoming providers. Many said they relied on referrals from other LGBTQI+ survivors or visited multiple providers in order to receive culturally competent care, causing delays in care during a critical period.

“This survey has some really positive news, for example, that many people can get to welcoming cancer care,” Scout said. “It also has some very clear areas where the health care industry needs to listen and act, for example how frequently [LGBTQI] people want tailored resources and how often we can’t find any.”

Finding inclusive support has been slightly easier during the pandemic, thanks to relaxed telehealth guidelines. This opens the door to more marginalized people being able to find inclusive and specialized care. Efforts to retain those resources are underway, including the proposed TREAT act (S.168/H.R.708) that asks for a temporary continuation allowing virtual care from any state without penalizing the provider.

The survey also revealed a gap in information. Only 3% of respondents identified as transgender compared to 92% who identified as cisgender. (Another 5% identified as nonbinary or gender non-conforming.) Trans people, especially trans BIPOC, have much higher health risks built into their lives coupled with significant barriers to accessible, knowledgeable, inclusive health care providers.

Scout noted that trans people who do see health care providers may not feel comfortable disclosing their true gender, which leads to inadequate statistics. Information requested on the intake form at a doctor’s office or cancer center gives the National LGBT Cancer Network data it needs to form a bigger picture of what’s going on with cancer care and survival.

Of course, this is a two-way street. “Don’t expect us to disclose to you something vulnerable until you’ve disclosed to us that you’re going to be welcoming,” Dr. Scout said. Putting up a Pride flag in June is not enough.

Dr. Scout offered suggestions for health care providers to demonstrate that they are inclusive, welcoming and safe. One easy way to do this, he said, is asking for and incorporating preferred pronouns into communications, using them to sign off on emails and including them on websites and business cards. Another is providing gender-neutral bathrooms. And, of course, the most important is that doctors, nurses and other medical practitioners and staff are trained in inclusive practices.

Scout said that the survey would be used to inform the network’s provider trainings and educational resources for community members. “The fact that more cancer centers are reaching out for training and to do community engagement gives me hope,” he said.

The National Cancer Survey is available for download at cancer-network.org.

Kelas Lloyd (they/them) graduated from UCF with a Bachelor’s degree in English. They write with a heavy focus on disability and LGBTQ+ topics, both of which are personal to them, and live in Austin with two cats. The cats are also personal. Follow Jackie on Twitter @tadandader.