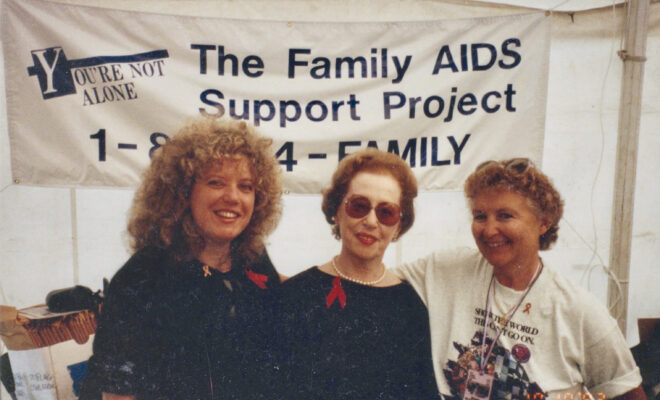 On December 4, the mother who inspired a movement of parents, families, and allies to advocate for their LGBTQ+ loved ones would have been 100 years old. PFLAG celebrates Jeanne Manford’s centennial birthday with a strong commitment to the advocacy that resulted in establishing what is the nation’s first and largest organization of its kind.

In that spirit, PFLAG National has sent a letter to President-Elect Joseph Biden from the diverse parents on the PFLAG National Board of Directors, committing to working with the incoming administration in support of Jeanne Manford’s legacy, and in service of PFLAG’s nearly 50 years working to create a country where equality and justice for all really IS for all.

“The world for LGBTQ+ people was vastly different in the 1970s when a schoolteacher from Queens joined the 1972 Christopher Street Liberation Day march carrying a sign that read, ‘Parents of Gays: Unite in Support for Our Chidlren,’” said historian and family friend Eric Marcus, creator and host of the Making Gay History podcast. “When Jeanne co-founded an organization for parents of gay people nine months later—with her son Morty and husband Jules—she risked her job and public scorn, but she did it because she knew that parents had a key role in protecting their children from harassment and unjust laws.” 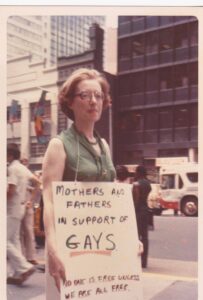 Indeed, in the early 1970s, laws in 43 states prohibited homosexuality. It was illegal to be gay, lesbian, bisexual, transgender, or queer (LGBTQ+). Official penalties if caught in a romantic or sexual relationship ranged from jail time to chemical castration. Unofficial penalties included public shaming, loss of employment, loss of housing, discrimination in healthcare and for far too many LGBTQ+ people, death. Yet, despite the social stigma, Manford and about 20 other parents, LGBTQ+ people, and allies gathered at what is now the Church of the Village in New York City and held what would be the first of many meetings to support and advocate for LGBTQ+ people.

“LGBTQ+ rights have come a long way thanks in part to Jeanne Manford’s advocacy and the ally movement she inspired. She urged parents, families, and allies to take action, to remove barriers, and to demonstrate love for their LGBTQ+ children, family members, and friends. In celebrating her 100th birthday, PFLAG National commits to continuing to carry that torch of advocacy until equal rights are extended to all people, inclusive of LGBTQ+ people,” said PFLAG National Executive Director Brian K. Bond.

Manford was born in Flushing, Queens and was a graduate of Queens College. In her career, she was a math teacher at PS 32 from 1964-1990. She and her husband Jules had three children, Charles, Morty, and Suzanne Manford Swan, who is now her sole surviving child. In recent years, the Manford family has taken its place in history. Shortly after her death in 2013, Jeanne Manford was honored with the 2012 Presidential Citizens Medal by President Barack Obama. A plaque now marks the historic site of the first PFLAG meeting at Church of the Village in Manhattan. In 2014, the street in front of the Manford family home at 171st Street between 33rd and 35th Aves. in Flushing, Queens was renamed “Jeanne, Jules, Morty Manford PFLAG way.” On May 20, 2017, the Jackson Heights Station of the U.S. Post Office was dedicated to Jeanne and Jules Manford. The Manford family, including granddaughter Avril Swann, continues the work of PFLAG.

In honor of the day, on Friday December 4th PFLAG National will partner with the Making Gay History podcast to highlight archival interviews with Jeanne and Morty Manford, and a brand-new interview with Suzanne Swan. These interviews will be featured on both PFLAG National and Making Gay History’s social media channels. PFLAG will also be re-elevating the speech given by President Obama, sharing Jeanne’s story and the story of PFLAG.