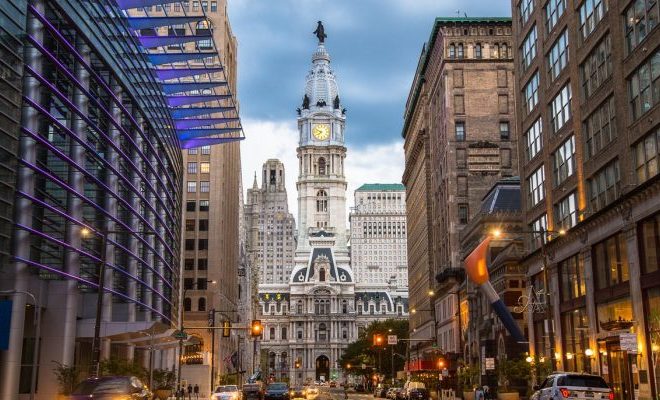 For more than 30 years, PHL Diversity has been driving diverse convention business to Philadelphia and creating jobs and economic opportunities for local businesses along the way.

Created in 1987, PHL Diversity is the business development division of the Philadelphia Convention and Visitors Bureau. Through concentrated, targeted outreach and initiatives, the division promotes the city as an ethnically diverse destination by showcasing the city’s multicultural communities. 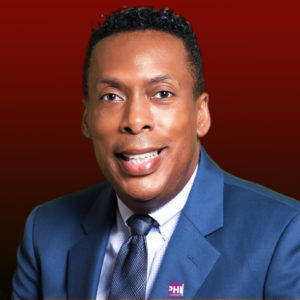 “The goal was to secure multicultural travelers to Philadelphia,” said Greg DeShields, executive director. “By doing that, we would also increase access to economic opportunities for underserved communities and develop a diverse pipeline of talent.”

Originally called the Multicultural Affairs Congress, the division was created to address concerns that Blacks and other people of color were being excluded from management level jobs and significant contract opportunities in Philadelphia’s tourism and hospitality sector.

The founders of the division — A. Bruce Crawley, U.S. Rep. Dwight Evans, Beverly Harper, Ernie Jones, Bob Nelson and Ahmeenah Young – wanted to bring diverse meetings and conventions to the city, but in exchange they asked for commitments from the tourism and hospitality industry to hire a more diverse workforce, especially in management positions, and diversify their supply chains.

In an episode of the PHL Diversity podcast, Crawley explained the “quid pro quo” agreement.

“The quid pro quo was in exchange for bringing millions of dollars in, we would, in turn, have the cooperation of the hospitality industry to create management level job opportunities and to do contracting on the construction side and the professional goods and services side,” Crawley explained.

With a clear mission at the forefront, the division got to work. The first initiatives focused on African-American suppliers and professionals, then expanded to include Hispanic, Asian-American communities in the 1990s. More recently PHL Diversity has expanded into new markets, such as LGBT and women.

Some of these initiatives are provocative and draw controversy, but DeShields takes that in stride. As part of the More Colors, More Pride campaign in 2017, the city added black and brown stripes to the iconic rainbow flag, an initiative PHL Diversity supported by adjusting its branding. The rainbow flag, commonly known as the gay pride flag or LGBT pride flag, is a symbol of lesbian, gay, bisexual and transgender pride and LGBT social movements. The colors reflect the diversity of the LGBT community, and the flag is often used as a symbol of gay pride during LGBT rights marches.

The idea came from Amber Hikes, executive director of Philadelphia’s Office of LGBT Affairs and part of the inaugural class of BEQ’s 40 LGBTQ Leaders Under 40. 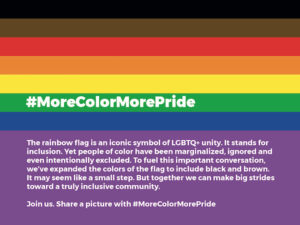 “As Amber moved into LGBT Affairs, her focus was on engaging with people of color in our LGBTQ community,” DeShields said. “One thing she learned is that people of color didn’t feel that the rainbow flag embraced them, they didn’t connect with it. So we added the black and brown stripes and offered that flag as an option.”

The new flag was well-received by Philadelphia’s black and brown LGBTQ community, and beyond. Emmy-winning screenwriter/actress Lena Waithe donned the black and brown striped flag as part of her ensemble at this year’s Met Gala. However, some other members of the community felt that the City had “fiddled with an icon”.

“You know, I don’t think there’s ever been a country that didn’t receive pushback when changing their flag,” DeShields said with a chuckle. “We offered it as an option to customers of ours who want to embrace diversity and inclusion, and most do prefer the black and brown addition.”

Both options of the rainbow flag are still available for purchase.

With the United States expected to become a minority-majority country by 2040, multicultural markets are increasingly vital business targets for convention & visitors bureaus. PHL Diversity is at the forefront of outreach to diverse markets through a range of programs and tools. As a result, in 2017, the Philadelphia Convention and Visitors Bureau hosted 51 events with approximately 41,000 attendees and 52,000 hotel room nights. That translates into $37 million revenue for the local economy plus $3 million in state and local taxes. This year alone Philadelphia is host to the NGLCC International & Business Leadership Conference in August and the US Hispanic Chamber of Commerce National Convention in October. DeShields says bringing those conventions to Philadelphia was the result of authentic engagement with the communities they represent.

“You have to be legitimately involved with each community,” he says. “I sit on the boards for many different local chambers of commerce. By being at the table when they talk about pivotal issues that are critical to their community, you get to know what they need and how to better serve them. Once you’re on a board and you’re engaged, you look for strategic collaboration opportunities – that’s how we secured the NGLCC conference, by working closely with the local chamber. Same with USHCC. It’s not a short game, it’s a long process to get you there. We’ve been around for 30 years, so we know how that works. We are here to create economic activity and growth.”

In 2015, DeShields drew on his previous experience with podcasting at the Fox School of Business and Management at Temple University to harness the power of another form of engagement, the PHL Diversity podcast. Now in its third season, the podcast serves as an outreach tool intended to promote Philadelphia as a multicultural destination for meetings and conventions. Each episode welcomes tourism and hospitality leaders, meeting and convention professionals and academics regarding specific hospitality, tourism and diversity topics.

As the host, DeShields invites these leaders to share insights, views and opinions about strategies and initiatives to raise Philadelphia’s image as a premier multicultural destination for meetings and conventions.

“The most important part of the podcast is when we ask our guests what groups they’d like to see come to Philadelphia,” DeShields said. “You never know when someone from one of those organizations will hear it and realize that we want them to come to our city.”

Planning for a strong future economy

In addition to bringing in conventions which benefit the local economy, PHL Diversity holds two key annual events: Hospitality Education Day, which focuses on connecting young adults to career opportunities in hospitality and tourism; and the Business Opportunity Luncheon, which provides vendors with insight about upcoming meetings and conventions as well as local, diverse companies that can meet their supply needs.

Hospitality Education Day is a free, invitation-only event that provides guidance to area high school and adult students in designated hospitality programs. In partnership with Community College of Philadelphia and the Greater Philadelphia Hotel Association, PHL Diversity created the event to support a career pipeline to benefit the regional hospitality and tourism industry.

The Business Opportunity Luncheon services to connect vendors with information about upcoming events in Philadelphia. Since its inception, the event has grown from about 50 attendees to more than 350 in 2018.

“We know that economic access is a consistent concern among all of our communities, so we focus on how to put suppliers in front of customers,” DeShields says.

In 2019, PHL Diversity will also host the second Diversity and Inclusion Conference, designed for CEOs, corporate and academic leaders, government officials, minority tourism executives and hotel organizations and university-level instructors in the hospitality and tourism sector. The event will highlight best practices, assessments, strategies and successful D&I initiatives with a clear focus on the business case and return on investment of implementing D&I strategies.

All of these initiatives work toward the economic success the team at PHL Diversity maintain as their primary goal. Other cities and communities can replicate this success, DeShields says, stressing the importance of long-term relationship building and authentic engagement working in tandem with a clear business case.

“Before you decide what you’re going to do, make sure there’s a long-term commitment,” he advises. “Diversity is impossible to accomplish if you can’t support it. Realize that there has to be a strong fundamental business case. We are about heads in beds. These ideas only work when they generate room nights. You have to be in it for the long haul and establish a clear-cut business case to support your ideas.”