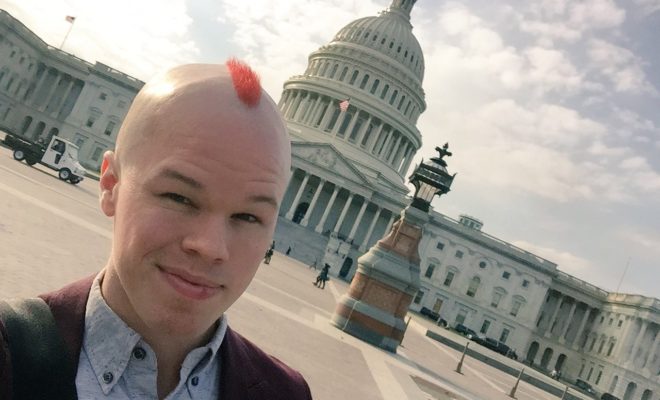 Sam Brinton does not blend in. Sam walks the corridors of power—they are an adviser to President Trump on nuclear energy issues—sporting their trademark red mohawk and frequently wearing sparkly heels paired with more traditionally masculine attire. In addition to being an actual nuclear engineer, Sam is also an activist against conversion therapy. After surviving this horrific form of abuse as a child, Sam is working to make conversion therapy illegal through their 50 Bills 50 States initiative. Learn more about this incredible person and their work in our exclusive Q&A.

BEQ Pride: What does a nuclear engineer do?

Brinton: A nuclear engineer’s jobs can be as various as helping to operate a nuclear power plant, perform nuclear medicine to save lives, manage nuclear waste and radiation, or work on nuclear weapons.

Brinton: Nope. Just like any other person, my introduction to nuclear energy was through mass media representation like Homer Simpson or most movies where the nuclear reactor was doomed to level a city. Thankfully my mother encouraged me to study deeper and after writing a report on nuclear energy. I got hooked on solving the problems and celebrate the solutions in nuclear issues.

BEQ: You’ve been a senior policy analyst at the Bipartisan Policy Center and an adviser on nuclear matters to Presidents Obama and Trump. What are some of the challenges our nation—and the world—face with regards to nuclear energy?

Brinton: Challenges with nuclear issues fall into three major classes: Economics, Waste, and Safety.
The cost of natural gas has plummeted so it is cheaper to build a carbon emitting gas plant than any other source of electricity. When nuclear energy provides 60% of the carbon free electricity in the US that’s a bad loss with every nuclear power plant that stops due to costs. Then we have the challenge of nuclear waste, my favorite. I’ve dedicated my career to the idea that my children will live in a world where we have found a consensual system to managing the small but radioactive waste from nuclear energy. And of course, because of a history where accidents have occurred, nuclear energy will always have the challenge of removing itself from the stigma of Chernobyl and Fukushima and assuring the world that clean energy need not lead to a nuclear meltdown. (Side note: It is safer to be a nuclear engineer than an accountant. Our field is super safe.)

BEQ: What unique qualities or perspective do you bring to the field of nuclear energy as an LGBTQ person?

Brinton: THIS is my best argument for my decision to become a nuclear engineer. Think about this: A nuclear engineer is constantly fighting the misperception that they are Homer Simpson and killing the environment with green glowing goo or about to build a nuclear bomb. They are constantly correcting public perception. And that’s what an LGBTQ person is doing too. We are helping our parents realize their idea of who we would marry isn’t necessarily the same. We are showing the world we are more than the stereotypical identities they see on TV. That’s why I think us LGBTQ nuclear engineers are the best nuclear engineers.

BEQ: For people who may not understand your gender identity or sexual orientation, how would you describe yourself?

Brinton: I tend to describe myself as a bisexual for my sexual orientation (meaning I am sexually and romantically attracted to two or more sexes or genders) and genderfluid for my gender identity (meaning I fluctuate among a variety of genders including masculine and feminine and androgynous).

BEQ: You’ve been very open about your personal life and choose to live authentically in what’s often seen as a fairly staid environment. What kind of response have you received in Washington, D.C.?

Brinton: There will always be rough days where you are laughed at or pointed at on the subway on the way to work. But there will also be days where Presidents, Senators, and CEOs recognize that my authenticity of perspective is something to be valued. My high heels and a red mohawk used to be a hurdle people thought I’d never overcome. Now, they remind DC that bringing your full self to work is the true benefit.

BEQ: The first time BEQ met you it was during a college speaking tour where you were talking with  students about conversion therapy.  Can you share a little about your experience as a conversion therapy survivor?

Brinton: Conversion therapy is the dangerous and discredited idea that you can change LGBTQ people into straight and cisgender people. To make it super clear: It is the erasure of my people. I was told I was the last gay child left alive. I was considered an abomination in the eyes of my God according to a therapist. My hands were frozen with ice, burned with heat and jolted with electricity while images of men touching each other were shown to train me to hate a man’s touch. I only survived by believing if I tried hard enough, it would work. It didn’t. I’m lucky I made it out alive. Many don’t.

BEQ: Recently you left your position at the Bipartisan Policy Center to focus on advocating for a nationwide  ban on conversion therapy. How are you raising awareness?

Brinton: I am SO honored to work with the National Center for Lesbian Rights and the #BornPerfect campaign to end the practice of conversion therapy once and for all. I always joke when you want something done right, you go to the lesbians. I’m honored to have also founded 50 Bills 50 States with the specific goal of finding grassroots action in the hardest to reach states so that every child will live in a state where the debate for their protection is occurring. No one can be left behind. And I’m still a consultant working on all kinds of awesome projects like nuclear waste management, advanced nuclear reactor design, and nuclear policy research.

BEQ: How can those of us who are against this horrific practice help?

Brinton: Everyone has a role to play. They can go to 50Bills50States.org to sign up to volunteer. We are founding a Student Network, Church Network and Outreach Network. Most of these new bills to protect children from conversion therapy have started with a volunteer beginning the conversation. The MOST valuable thing that can be done is not being silent on the problem. This issue is critically in need of attention. Talk about it, tweet about it, sing about it, write about it.

BEQ: We’ve all seen campaigns directed at young people saying “It gets better.” Having come through an incredibly painful experience yourself to the “it is better” side, what advice do you have for a young person who is struggling with or having difficulty handling issues surrounding their sexual orientation or gender identity?

Brinton: This is the hard part of survival. You WISH you never had to fight as hard as you did. I think my main advice for the management of all the craziness that life seems to throw at LGBTQ youth is not that it gets better but that it doesn’t have to be this way. We have to stop accepting that LGBTQ youth will either live a great life with accepting parents or a horrid life in conversion therapy. The likely situation is right in between. So I tell the young person “They can’t change what you never chose. And I’ll keep fighting so that they can’t even try to.”

← Previous Story Parenting as an Upstander
Next Story → Stanford LGBTQ Executive Leadership Program: Developing the Next Generation of LGBTQ Leaders