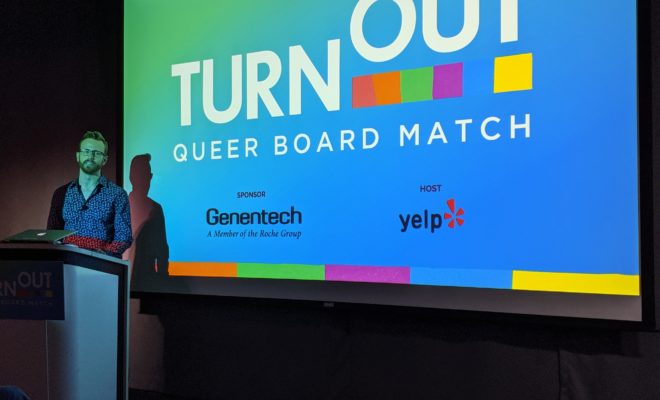 Queer Board Match: Connecting volunteers with opportunities to serve at the next level

Identifying and recruiting potential board members to a board of directors can be a challenge for many non-profit organizations. For those serving the LGBTQ+ community, the challenge can be even greater — both for the boards seeking new voices and individuals wishing to volunteer.

In an effort to demystify the process, TurnOut expanded its mission with the creation of its LGBTQ+ Nonprofit Board Forum series and Queer Board Match, a program designed to equip individuals and nonprofit organizations with the tools, knowledge and support they need to develop and retain high-impact boards of directors.

Founded in 2015, TurnOut has been working to support and connect members of the LGBTQ+ communities with nonprofits in need of volunteers in the San Francisco Bay area with great success. Founder and Executive Director Jack Beck said it was in the course of connecting with those nonprofits and volunteers that he started noticing a pattern of boards in need of board members and willing volunteers without the knowledge of how to find a seat on a board.

Out of that knowledge, Queer Board Match was born. The early response was confirmation of the need for such an event.

“When we sent out our initial invitation, we had over 100 people sign up in the first 24 hours which was a response beyond anything that we expected,” Beck said. “Ultimately we had almost 350 people register, and we had more than 100 come, which is wild because nonprofits have such a hard time finding new board members. The fact that there was this kind of response for this level of leadership was, I think, really incredible.”

Brett Andrews, CEO of Bay Area nonprofit PRC, sees Queer Board Match as an opportunity to bring various stakeholders together to tackle issues that impact the community.

“Given the pressing needs in our community, we know it’s going to take the collective effort of government, nonprofits and the community at-large coming together to solve these critical issues,” he said. “TurnOut’s mission of educating LGBT professionals to better prepare them for and connect them to nonprofit board service is critical to mobilizing efforts and marshaling resources – bringing greater purpose and value to our lives.”

The forum was designed to unravel the mystery that may surround nonprofit leadership, with panels focusing on board service and what it means to serve on a board of directors. It can be intimidating to be approached for a board position without some knowledge of what board service entails. Many may be put off by an otherwise rewarding experience.

“I think so many people feel that way about it, you know, that it’s kind of a mysterious thing, but it sounds like it could be cool and something worth doing, but it’s just not clear exactly what ‘it’ is,” Beck said.

Twenty-four nonprofit organizations participated in the forum and of the attendees, 44 percent had never served on a board of directors. Every nonprofit identified at least one potential board member during Queer Board Match, and almost all of the attendees found a board they were excited to join.

For nonprofits that have a difficult time recruiting board members, Beck said that was a huge accomplishment.
Jennifer Schuster, Board President of Folsom Street Events, spoke at the event and praised the organization for demystifying board service.

“TurnOut’s inaugural Queer Board Match event gave our non-profit the opportunity to make board service welcoming and accessible,” she said. “Board service doesn’t have to be intimidating — as long as you have a passion for the mission, show up and follow through, you’ll be an asset to any board.”

TurnOut Board Member Chris Tingley said a grant from the San Francisco-based biotech firm Genentech helped facilitate the forum, which was hosted by Yelp. Next, Tingley said, TurnOut will continue the momentum of Queer Board Match with a series of one-on-one sessions targeted at those serving on LGBTQ+ boards, those who have recently joined those boards and those who are interested in serving. It’s important, he said, to focus on offering these types of opportunities to queer communities because they so often get left out of mainstream programs.

“There are all sorts of these [forums] out there — I went to one with our executive director a few weeks ago sponsored by Harvard Business School,” Tingley said. “It was ‘best practices for recruiting new board members at your nonprofit,’ but we were the only LGBTQ nonprofit there. Not that we didn’t find the information applicable, it just didn’t feel like it was our space. So, what we thought was amazing was, when we do this, we are solely promoting it as a queer-focused event and really making it about that community.”

Both Tingley and Beck said they see the potential for growth in the forums, with focuses on fundraising and networking on the horizon. By giving people the tools they need to be successful, it only strengthens the nonprofits they are serving.

“No matter what nonprofit you’re serving on, you’re going to be facing similar challenges, and it’s nice to have a network of people who might have faced it before and might have found some good solutions or who have some ideas that you haven’t thought of,” Beck said. “People join boards and then they’re kind of pushed into the deep end, but often nobody really supports them in how to do what they need to do well. That’s what we’re hoping to accomplish with this forum series.”

Learn more about TurnOut and the LGBTQ+ Nonprofit Board Forum series at turnout.org.