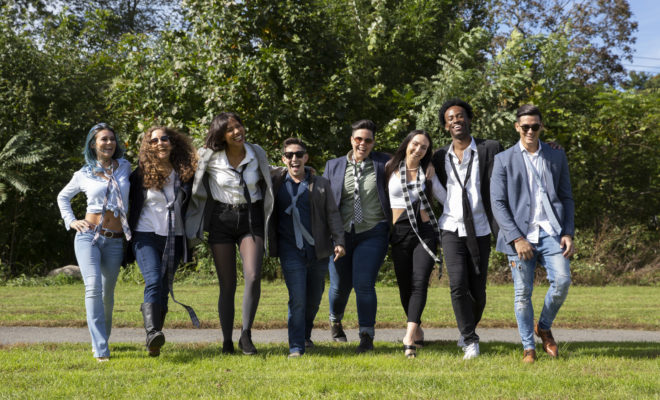 Sheryl Horowitz is reinventing a traditionally masculine accessory for the 21st century with Ty-Amo, the world’s first producer of gender-inclusive, non-binary ties.

“I’ve always liked what wearing ties represents,” Horowitz says. “My grandfather wore a tie every day because it made him feel special and important. We’re giving ties a new identity and a new message. Instead of being about masculine power and the gender binary, we’re making them about empowerment for all.”

As a young professional, Horowitz embraced the necktie. She began her career as a genetic counselor in the late 1980s before switching gears and becoming a recruiter for the pharmaceutical and biotech industries. It was during the last decade of the 20th century that she made the traditionally masculine accessory her own.

“I remember back in the 1990s when a lot of women’s fashion was inspired by menswear, I went to the flea market and bought Italian silk ties for $1 and decorated them myself to give them more of a flair,” she says. “I would throw them on over a turtleneck or a t-shirt, whatever I was wearing under my lab coat.”

While vacationing in California, boutique owners noticed her unique accessories and started asking where they could be purchased. Horowitz ended up with a side business selling her hand-embellished neckties to boutiques in Los Angeles and Carmel.

Eventually the fashion trends changed and the flea market ran out of ties. Horowitz focused on being a single mother to her daughter and son as well as building her new company, FPC of Marlboro, a firm specializing in staffing and placement services for clinical research personnel in the pharmaceutical and biotech industries.

But her affinity for fashion remained, and during a trip to Europe she noticed that menswear-inspired fashion was on the rise again. This time, as the mother of a daughter entering the workforce soon and a son who recently came out, Horowitz began looking at fashion – and one accessory in particular – as a means to promote inclusivity and break down barriers.

In 2018, Horowitz launched Ty-Amo with the express mission “to share the values of millions in helping to encourage equality and empowerment for women and the LGBTQ community.” 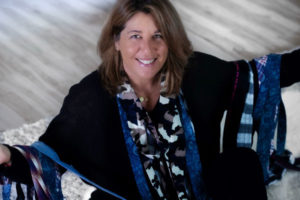 “We want to get rid of stereotypes both inside the closet and outside the closet,” she says. “The tie is one of the most gender-specific accessories out there. My goal is to recreate it and give it a new life, a new meaning and a new identity.”

She, as well as Ty-Amo, values individuality. The line of tie accessories is meant to be worn in multiple ways, allowing people to express their individual style, whatever that looks like.

“Ty-Amo strongly supports equal rights and human rights for all,” she says. “We believe in the right to be accepted for who you are, how you love and how you present in the world. This means breaking through stereotypes because human connection is the best education, and tolerance is one of life’s best teachers.”

Horowitz’s vision of equality and empowerment is integrated throughout the enterprise, from sourcing to production to marketing.

Ty-Amo fabrics and trims are imported from Japan, but Horowitz envisioned creating positive local economic impact in addition to promoting social change through her company. When researching suppliers, she learned that Portland, Maine, was especially hard hit by the 2008 economic recession, resulting in several factories shuttering and hundreds of jobs lost. Sensing the opportunity to make a real difference in people’s economic well-being, Horowitz partnered with a small, family-owned manufacturing company located in Portland as well as a pattern maker, designer and printer to produce Ty-Amo products.

“Finding the right team was a challenge, but it was important to me that our manufacturing is done in the United States,” she says. “We found amazing craftspeople who do quality work in Portland and I couldn’t be prouder of the results.”

Hope Rovelto, owner of Little Chair Printing, the only queer woman-owned screen-printing shop in Maine, is one of those craftspeople. Her custom screen-printing can be found on several of Ty-Amo’s unique ties, a creative partnership that aligns perfectly with her values.

“As a very small business and as a queer run business, working with Ty-Amo is the type of client I want to print for,” Rovelto says. “My heart is in working with socially conscious companies. If your mission is to make inclusive products for the LGBTQ communities, it makes sense to use businesses in that community or very strong allies.”

Horowitz also insists on using models from a variety of ethnic and age groups as well as different body types to represent the products.

“We wanted the message to be that we represent everyone, whether it’s an ethnic minority struggling with identity or someone struggling with gender roles or sexuality or balking at ageism, we hear you, we see you,” she says.

Recently Ty-Amo announced a partnership with The Phluid Project to produce the Authentic Pride 2019 50th anniversary tie collection, coming this Spring. The Phluid Project is a gender-free shopping space located in New York City. This year the enterprise is partnering with Champion, Nike, Fila and other designers to create an authentic line of clothing celebrating the 50th anniversary of Pride with 10 percent of all sales donated to the Stonewall Foundation.

Horowitz has been working toward a partnership like this from the start, looking for opportunities to give back and make a difference in real, tangible ways – whether through promoting inclusion, creating positive economic impact or financial contributions. Less than a year after launching Ty-Amo, she has already achieved a lot of what she set out to do, but for Horowitz, this is just the beginning.

See the new line of gender-inclusive ties at ty-amo.com.

← Previous Story Is Certification Right for My Business?
Next Story → How an hour a week is launching four women to business success