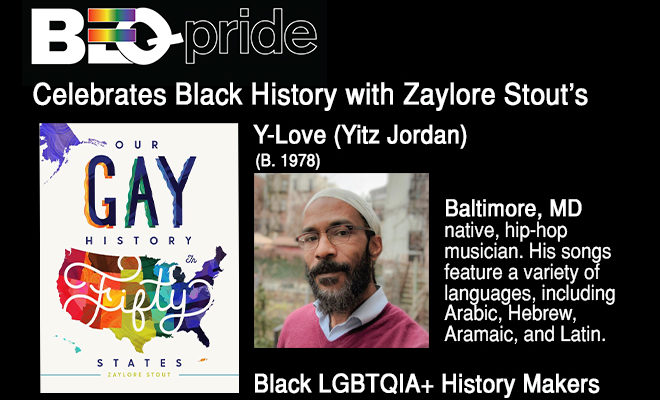 Y-Love (Yitz Jordan) (Baltimore, MD) is a hip-hop musician. His songs feature a variety of languages, including Arabic, Hebrew, Aramaic, and Latin. A former Hasidic Jew, though neither of his parents is Jewish, Jordan began to practice freestyling to help him memorize religious texts while he studied at Ohr Somayach yeshiva in Jerusalem.

One of his former rabbis, Meir Fund, told Jordan that his music would never spiritually enrich anybody; Jordan responded that banning any genre of music does not benefit the Jewish community. In 2008, Jordan released his first album, This is Babylon.

He came out as gay in 2012 and said he struggled to reconcile his sexuality with his religious past until he realized, as he said, “It’s God’s will to be gay.” Jordan’s music has a following in Israel, and he hopes it helps young Jewish people embrace their identities.