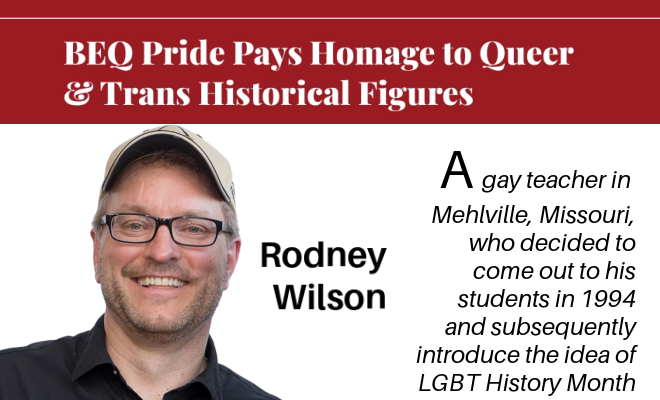 Our mission is to “engage, empower, accelerate” economic equality in the LGBTQ community. Because the community is intrinsically intersectional — LGBTQ folks come in all gender expressions, ethnicities, religions and abilities — our mission is also intersectional. Every issue we publish, every piece of content we produce is judged against that mission. Does it engage? Does it empower? Does it accelerate economic equality?

October is LGBT History Month. Like other heritage months, the purpose is to teach and highlight the contributions of a community often overlooked or erased from our nation’s history. Of course, at BEQ Pride we draw inspiration and understanding from both current and historical figures to better understand the importance of inclusion and belonging in business. In honor of all Queer and Trans individuals that shape our thinking about the possibilities for full equality, we have selected eight individuals whose lives, an aspect of their work or their accomplishments align with the work we seek to do at BEQ Pride. This will be an ongoing dialog we wish to engage in with our readers and the larger LGBTQ community.

But first, we begin with the courage and vision of Rodney Wilson. He is the only individual on our list who is alive as of the publication of this article. As a gay teacher in Mehlville, Missouri, who decided to come out to his students in 1994 and subsequently introduce the idea of LGBT History Month, we want to honor his authenticity. Wilson modeled his idea for LGBT History Month after Carter G. Woodson who founded Black History Week which later became Black History Month. Wilson spoke at his alma mater, Southeast Missouri State University, in October 2019, at the 25th anniversary of the founding of LGBT History Month. When talking about the value of months celebrating different histories, he said, “All of these are designed to highlight and publicize long-neglected stories. They are about saving part of the past. They are also a political act because to assert that one’s group has a history, is a political act. To assert that every group has a right to see its people in what Carter Woodson called ‘the great theatre of events’ is a political act.” Wilson understood the power of shared history — both in the sense of a group’s communal experiences and in the sense of publicizing and honoring those experiences. We believe that in sharing stories from the LGBTQ+ community, in elevating in amplifying those voices we are engaging, empowering and accelerating the true benefit of our shared American history—belonging.

Gloria Evangelina Anzaldúa was a scholar of Chicana cultural theory, feminist theory and queer theory. Born in South Texas with Spanish and indigenous heritage, Anzaldúa believed that the very act of writing is liberating and transformative. She edited several volumes of essays by women of color, wrote children’s books and many other works of fiction and poetry. In her 1987 essay “Borderlands/La Frontera: The New Mestiza”, she wrote, “The ability of story (prose and poetry) to transform the storyteller and the listener into something or someone else is shamanistic. The writer, as shape-changer, is a nahual, a shaman.” Anzaldua’s headstone memorializes her words: “May we seize the arrogance to create outrageously, soñar [dream] wildly — for the world becomes as we dream it.” Here at BEQ Pride, we are arrogant enough to believe full equality is inextricably tied to economic prosperity and the pursuit of happiness for all.

John E. Fryer, also known as “Dr. H. Anonymous”, persuaded the American Psychiatric Association to remove homosexuality from the Diagnostic and Statistical Manual of Mental Illness while wearing a disguise. He was the first gay psychiatrist to speak publicly about his sexuality. As an American psychiatrist and gay rights activist, his 1972 speech before the APA began: “I am a homosexual. I am a psychiatrist”. Homosexuality was removed from the Diagnostic and Statistical Manual in 1973, a year after Fryer’s speech. Dr. Fryer’s example reminds us to use our voices to bring about change.

Harvey Milk is perhaps best known as one of the first openly gay elected officials in the United States when he won a seat on the San Francisco Board of Supervisors in 1977. His public service is inspiring, as is the fact that it grew out of a desire to empower LGBT business owners. Milk and a few other San Francisco business owners founded the Castro Village Association, a first in the nation organizing predominantly LGBT businesses, with Milk as president. Today’s LGBT chambers of commerce and business councils are the descendants of the CVA. Milk also recognized intersectionality as a strength to be leveraged. He pioneered the building of coalitions between diverse groups — women, Asians, Hispanics, the disabled — to promote economic success and equality. We are building coalitions between diverse groups by recognizing and affirming the diversity of the Queer and Trans community every day.

Bayard Rustin may have preferred to let others be the face of the fight for civil rights, workers’ rights and gay rights, but he was known as “an intellectual engineer behind the scenes.” Born and raised a Quaker, Rustin’s approach to activism hinged on nonviolence and his deep belief in the concept of one human family, with all members of that family being equal. A gifted organizer and thought leader, Rustin’s enduring contributions to the Civil Rights Movement cannot be overstated. One of his many roles was as chief advisor to Dr. Martin Luther King, Jr. in the 1950s and early 1960s, to whom he taught Mahatma Gandhi’s philosophy of nonviolent resistance. He served as the lead organizer of the 1963 March on Washington for Jobs and Freedom and took part in numerous social justice campaigns around the world. Rustin reminds us that the “invisible” work is just as crucial to our mission as what the public sees.

Edie Windsor is a name that recently entered the echelons of history. Her decades-long fight for LGBTQ+ rights culminated in the 2013 landmark victory over the Defense of Marriage Act (DOMA), setting the stage for marriage equality for all. “Edie Windsor is a hero and civil rights icon who pushed our country closer to the promise of a more perfect union,” said then HRC President Chad Griffin. We too are pushing forward and ever closer to a more perfect union.

Born Anna Pauline Murray in November of 1910 in Baltimore, MD, Murray was a civil rights activist who later became a lawyer, women’s rights activist, Episcopal priest and author. Murray was arrested in 1944 for sitting in the whites-only section of a Virginia bus with a friend. They graduated first in their law school class where they were the only woman and was denied a post-graduate work opportunity because of their gender. They became the first African American to receive a degree of Doctor of Juridical Science from Yale University. Thurgood Marshall called their book States’ Laws on Race and Color the “bible” of the Civil Rights Movement. Contemporary transgender scholar-activists support the emerging view of Murray being an early transgender figure in U.S. history. We draw inspiration from their tireless work to challenge inequity and inequality on all fronts.

Audre Lorde, self-described “black, lesbian, mother, warrior, poet,” was among the first to articulate the intersections of race, class and gender in canonical essays such as “The Master’s Tools Will Not Dismantle the Master’s House.” She was also instrumental in breaking the silence around illness, body image and women’s pain, inspiring what is now Breast Cancer Awareness Month (also in October). A cancer survivor, her powerful collection of essays titled The Cancer Journals recounted her journey in battling the disease — and the personal transformation that resulted. Lorde dedicated her life and her talents to challenging systems of racism, sexism, classism and homophobia. We aspire to be as bold and fearless as she in furthering the march toward equality.

These are just a few of the people whose lives and work shape and inspire us daily at BEQ Pride. We also invoke the names of James Baldwin, Marsha P. Johnson and Silvia Rivera and many more in solidarity and in tribute to the realization of full equality for the Queer and Trans community.

Who would you add to the list? Who inspires you?