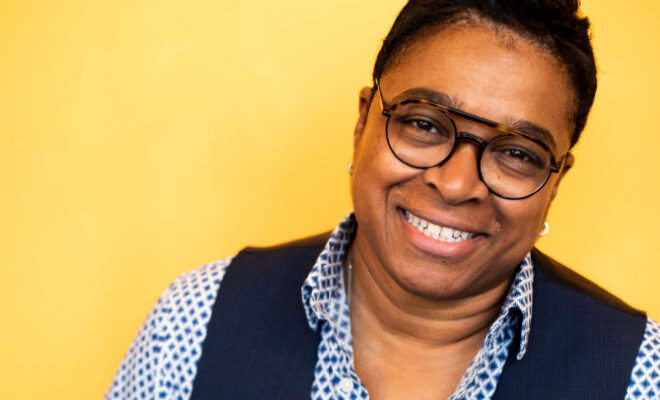 By Julie A. Palm
Photos by Laura Kaur

Gina Tomlinson, founder and chief technology officer for T5 Solutions Technology Consulting Services, discovered her passion for technology as a child. It took a bit longer to uncover her purpose.

As the name of her firm indicates, T5 Solutions provides tech assistance, from IT consulting to systems integration to IT support. But as Tomlinson explains, what T5 Solutions really does is improve lives and build communities. Tech is the means to the end.

“Our mantra, mission and purpose is service to others,” Tomlinson says. T5 Solutions’ clients include small businesses, municipal and county governments, and nonprofits. Before taking on any new project for any client, Tomlinson wants to know: How does this serve the community?

A self-described “proud Midwesterner,” Tomlinson was born and raised in Dayton, Ohio, the fourth of five children in a close-knit family. She later studied and earned a degree in computer science and earned various certifications in various “technology verticals.”

Tomlinson might have stayed in Ohio if not for a tragic series of losses when her mother, father and maternal grandmother died in quick succession. Wanting to be close to other family, Tomlinson joined her siblings in California in the late 1990s, settling in Oakland and taking a job with The Clorox Co.

She later moved into the public sector, serving as chief information officer for the San Francisco Municipal Transportation Agency and then CTO for the city and county of San Francisco. Those roles helped form the service-based ethos of T5 Solutions.

“When I worked for the city of San Francisco, I was engaging with the citizens, and our team was able to make their day-to-day lives better in a direct, impactful way,” Tomlinson says. “In the public sector, technology needs to operate for the public good. Frankly, I had never considered technology from that perspective up to that point. It really awakened something in me — a desire to serve and to give back to my community.”

Tomlinson started T5 — the “T” stands for “Tomlinson” and the “5” represents the five Tomlinson siblings — as a side hustle in the early 2000s but decided to dedicate herself to building the business in 2015.

T5 Solutions currently uses mostly contractors for staffing. Tomlinson handles strategy, client advising and “occasionally does some hands-on work to keep my skills up,” she says with a laugh. The company’s client base is concentrated in California, but Tomlinson plans to expand to other regions. She says her experience working in a variety of “business verticals,” such as nonprofits, tech startups, higher education, the private sector and the public sector, “allows me to think differently and add value for clients. It gives me a broad perspective.”

Tomlinson has been selected as one of ComputerWorld’s Premier 100 IT Leaders and also named one of the San Francisco Business Times’ 150 Most Influential Women in Bay Area Business. She serves as a technology adviser and mentor for organizations that encourage students of color to explore their interest in STEM fields.

“My whole career, being Black, female and gay has always been a challenge. I know my race, gender and sexual orientation have been deemed by some as deficits, and I’ve certainly felt the slings and arrows of discriminatory practices,” she says. “So, I like to get involved with initiatives and causes that lift up and empower those narratives. Technology has always been a passion for me. I want people who look like me and love like me to love it, too.”

Her work as chairwoman of the Technology Committee for the newly formed Freedom Football League allows Tomlinson to combine her technological expertise with another passion — sports. (Ask Tomlinson about her favorite teams and she’ll rattle off a list of pro football, basketball and baseball teams in both Ohio and California. “I’m a loyalist to my Ohio teams but I’ve grown to love California teams, too,” she says. “I’ve got room in my heart for them all.”)

The league, started by former NFL players, seeks to reinvent football by centering players, creating an economically just financial structure and reimagining the game experience for fans — just the kind of service-oriented project Tomlinson enjoys. Technology could make the league more fan friendly and highly interactive. “Think apps that could allow a fan to call one play during each game or biometrics that could help viewers better track player performance,” she says.

“I work a lot but I have a passion for everything I’m working on,” she says. “My faith in God has been a driver of my life, and I know the work I’m doing is divinely driven. It’s all about serving.”

← Previous Story Equator Coffees is ready to build back better
Next Story → John Sotomayor: From ‘Survivor’ Blogger to Award-Winning Publisher