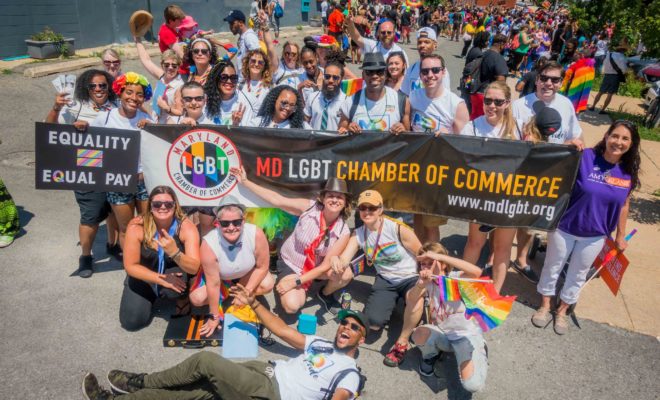 Maryland LGBT Chamber of Commerce represents diversity within the community

“Earning the Rising Star award before we’d even completed year one confirmed that we’re doing the right things and putting the right things in place for success,” says Joan Cox, the chamber’s immediate past president and chief creative officer for Peacox Design. (Tom Koerber was named president at the organization’s May meeting.)

The chamber was founded by another team — Cerulo and Dave Imre, two business owners who met through NGLCC events. They knew the value of connections made through LGBT chambers and, having both earned LGBT Business Enterprise certification, understood the economic opportunities that come with the designation. In 2016, they reached out to their network of professional and social contacts to start the Maryland group.

“The number of LGBT chambers was rapidly growing through the United States and with chambers located in D.C. and Philly, it was a logical strategy to open in Maryland,” says Cerulo, chief executive officer of AdNet/AccountNet Inc.

From the start, organizers sought to create an inclusive, diverse chamber, even beyond the L, G, B and T in its name. “In addition to diverse skill sets that helped get us off the ground quickly, we’ve got a good mix of people in leadership — male/female, younger/older, etc. — and we have solid representation of the L, the G, the B and the T,” Cox says. “We’ve all seen groups fail because they weren’t intentional about diversity. We didn’t want that to happen to us.”

The chamber officially launched in June 2017, during Pride, and quickly built a calendar full of social and business development activities, including monthly networking sessions, quarterly educational events, supplier diversity days and a business expo. This April, the chamber hosted its first Maryland LGBT+ Champions Awards, a sold-out event that honored leadership and advocacy.

The group is expanding its programming, adding quarterly roundtables for corporate employee resource groups, as well as mentoring events for companies interested in becoming certified. It is also building its infrastructure, seeking a permanent office and hiring a part-time executive director.

“Although we love to have a good time, we’re not just throwing networking events and having fun,” Cox says. “Advocacy is a big part of what we do, too.”

The chamber secured an executive order in Baltimore “that opens up the competitive procurement opportunities for LGBT-owned businesses,” Cerulo says. The group also testified before the Maryland Public Service Commission, making the case that the commission’s guidelines for spending at minority- and women-owned businesses should be expanded to include LGBT-owned enterprises.

Although it is based in Baltimore, the chamber has members throughout Maryland and, now that it is well-established, the group is expanding programming. “We started in Baltimore but have never wanted to confine ourselves there,” Cox says. “The idea has always been to go statewide, though we knew it would take some time to grow and reach those areas. I’d like us to be across the whole state, with monthly networking and business expos in two or three corners.”

The chamber’s membership has grown quickly, reaching 150 in its second year, ahead of projections. Cox would like to see the group grow to 250 by its third anniversary.

For companies considering joining, member Johanna M. Dolan says, “There are many opportunities for us to work together and many organizations that are seeking to become LGBT affirming, making the business community even more dynamic.”

Dolan, founder of Dolan Research International and Axiom Sober Coaches, sees benefits for LGBT business owners and allies in connection with the Maryland LGBT Chamber. “I would say to LGBT business leaders, ‘There’s freedom in being out and a visible member of the Maryland LGBT Chamber — come, we need you and we can help you grow.’ To LGBT allies, I say, ‘When you work with a chamber member, you know that not only are you getting a talented business professional, you’re also getting one that is 100% focused on doing the work at hand,’” she says. “Authenticity brings with it not only freedom but greater creative abilities and leadership skills.”

Learn more about the Maryland LGBT Chamber of Commerce at mdlgbt.org.