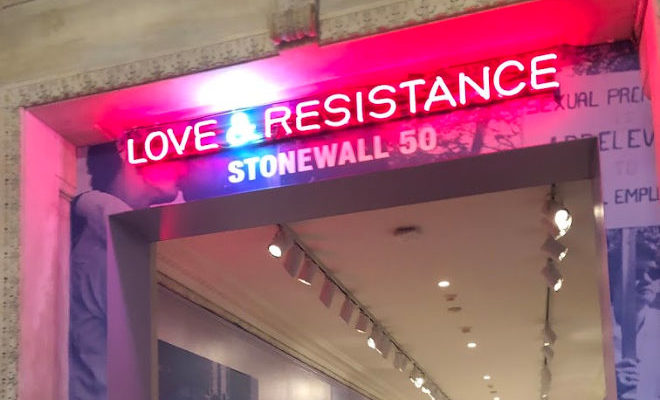 “Love & Resistance” at the New York Public Library commemorates the 50th anniversary of the Stonewall Uprising. Consisting of photos by Kay Tobin Lahusen and Diana Davies and ephemera from the 1960s and 1970s, the exhibit weaves together the historical context and impact of the uprising and the gay liberation movement.

By highlighting connections with the civil rights and anti-war movements, the exhibit captures the ways in which activists brought their many different identities to the movement. One of the more striking exhibits is the section entitled “Love,” which features portraits of LGBTQ intimacy. These portraits boldly depict LGBTQ relationships – both romantic and platonic – in an era when LGBTQ people could be arrested for public displays of affection. 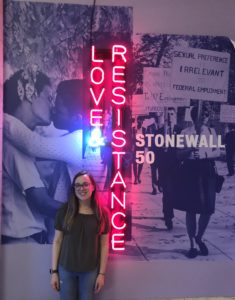 In the “In Print” section, I found myself drawing parallels to modern activist movements. The exhibit highlights how small magazines such as Christopher Street and The Ladder helped the LGBTQ community build its culture and movement. Today, social media organizers can attract thousands to a cause with a single click and members of the LGBTQ community are able to connect online for the support they often cannot find locally. But as the internet has become an increasingly hostile and combative forum for many, those seeking to express themselves and connect the like-minded have also returned to the print medium, creating zines and other special interest publications, as evidenced by the entire zine library at my college.

A flyer for the 13th Anniversary Pride March in 1982 illustrates the movement’s grassroots origins. The evolution of the Pride Parade from a small annual demonstration and celebration within the LGBTQ community to a massive, corporate-supported event has caused mixed reactions within the LGBTQ community. While it is incredible how much corporate America has grown with regard to acceptance of the LGBTQ community over the past 50 years, there is a risk that excessive corporate branding of what was once a community celebration can detract from its message. The exhibit itself finds a balance between highlighting corporate sponsorship as a reflection of a new era and focusing on the leaders and storytellers of Stonewall: “Love & Resistance” is sponsored by TD Bank, but corporate logos are not featured in the exhibit and the sponsorship is noted only on the exhibition guide.

As someone entering the workforce, I am encouraged to see corporations express their support for the LGBTQ community in ways that would once have been unimaginable. Last summer I marched in the New York City Pride Parade with the Movable Ink team, wearing our “Inklusive” t-shirts as we cheered our way past the Stonewall Inn. Like many of my peers, I view an inclusive work environment not as a priority but a prerequisite in my career pursuits.

The exhibit presents the Stonewall Uprising not as a historical moment but as the catalyst for a movement that is still active 50 years later. In the exhibit guide, curator Jason Baumann writes that he hopes “visitors to this exhibition will be inspired to reflect on this history and engage in future movements for liberation and justice.” This framing of the gay liberation movement as ongoing and ever-evolving helped me to feel not only more connected to the era of Stonewall but also more connected with modern activist movements happening all around me.

“Love & Resistance” is on exhibit at the New York Public Library through July 13, 2019.

Elizabeth Herman is a rising junior at Barnard College of Columbia University majoring in Political Science and Human Rights. She is a member of Barnard’s Athena Scholars program, which is designed to foster and promote female leadership. Elizabeth is interested in domestic and international public policy, with a specific focus on women’s rights.