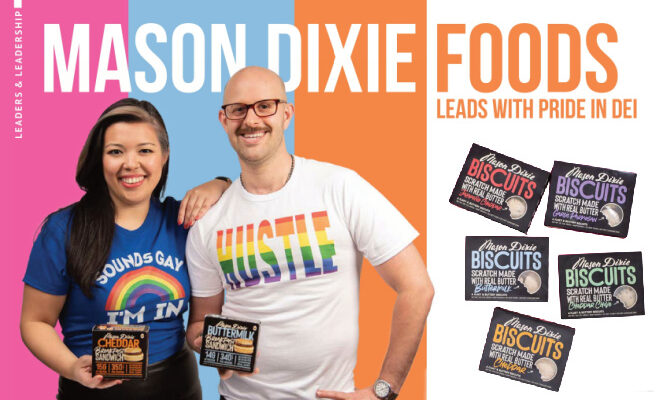 When it comes to diversity, equity and inclusion in the workforce, Mason Dixie Foods is showing people how it’s done. A 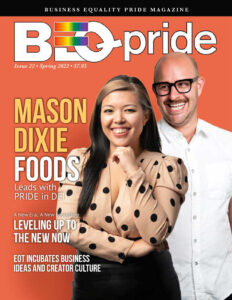 woman, LGBTQ+ and BIPOC-owned and operated enterprise, Mason Dixie Foods has grown from a small pop-up to a clean-label frozen foods enterprise carried in more than 6,000 stores nationwide.

Not bad for something that began with a no-frills Southern biscuit.

Abuelhiga grew up in Baltimore, Maryland, the daughter of immigrants — a Korean mother and a Palestinian-Israeli father. She found comfort in the Southern food dishes her family enjoyed. It was this experience that would eventually inspire the George Washington University graduate to start the Mason Dixie Biscuit Co. in 2014, as Washington, D.C.’s first ever pop-up. The venture was funded in part with a successful Kickstarter campaign.

In 2015, she met Perkins. Perkins represents the LGBTQ+ side of Mason Dixie Foods’ leadership team.

“We just clicked immediately. It’s like when you find your significant other – you just mesh in a very organic way,” he said.

“Ross did the worm at my 30th birthday – that sealed it for me,” Abuelhiga added. “But that was only after I realized he was smart, hard-working, and very funny. We just got each other’s work ethic so quickly and were yin and yang.”

It’s that “yin and yang” that would help the company’s burgeoning success that year when Whole Foods Market came calling. The brand expanded across the United States that same year. And while some criticized Abuelhiga’s choice in opening a Southern foods kitchen, she soldiered on.

“I have never held myself to the lens that the world tends to impose on me and I never intend to,” Abuelhiga said. “I look Asian, but I am fully American and consider myself more culturally American than I do Asian or Middle Eastern, so why can’t I have a heritage love affair with Southern food? Why can’t someone who doesn’t look like Paula Deen make southern food? It was almost as if the challenge of breaking the mold made it more worth it too – it’s time to break from stereotypes and historical bigotry. We are the new America and we want food that represents what we as Americans want, regardless of gender, race, religion or sexual orientation.”

And Mason Dixie Foods’ staff and hiring practices are a perfect example of that “new America.”

“Inclusion means hiring the best people for the job regardless of what the person looks like, who the person loves, and how the person identifies. It’s all about getting the best of the best no matter who they are,” Perkins said.

Abuelhiga agreed, stating that inclusion means “never having to explain yourself.”

“Inclusivity today is being confused as synonymous with diversity but that is a huge misconception,” she said. “Acceptance isn’t just a hiring practice to prove you’re not biased. Inclusivity means actually creating an environment where people can be 100% themselves, safe and comfortable, and never have to explain themselves or feel different. It’s more active than just proving there are different people around you. It’s altering the culture and community practice you are building to allow for acceptance and safety. I am proud to say we are doing it well.”

“The best thing about hiring diverse people from diverse personal and professional backgrounds is we have so many unique perspectives that make Mason Dixie Foods such an incredible place to be,” Perkins said. But he said it’s more than just hiring for diversity’s sake.

“Hire people that add to your corporate culture, and look for candidates in spaces and industries where you least expect it,” he said.

“Hiring and nurturing diverse talent means more than just saying you are open to hiring based on diversity status,” Abuelhiga added. “It means you are ready to commit to investing at all levels —  including C-suite. It means that you…need to nurture training and experiential programs to help usher [others] into the fold. And you have to be patient — change is hard on everyone and it takes time to do it right, but you have to start somewhere.”

Abuelhiga said that this is a commitment that makes for “happy people” and a “healthy business” where people are excited to come to work every day. People share ideas, engage more and even understand more about the business.

“… we are more representative of the American public than any company out there now,” Abuelhiga said. “We are building products and culture that match the characteristics of how diverse America has become. It means that we are more representative of our consumer base and their needs because chances are, one of us here represents a fraction of some part of the population that hasn’t been considered to date. [This] makes us more relevant than our competition.”

And that future? Well, it’s nearly as golden as some of Mason Dixie Foods’ famous biscuits.

“Mason Dixie Foods is just getting started,” Perkins said. “We have so many ideas on how to bring better-for-you options to your local freezers whether that’s at the supermarket, your corner store, or even at your next hotel visit. … There is a tremendous sense of pride to see what Ayeshah and I have built. But we don’t let that pride make us think that it’s over. We’ve only just begun.”

“It is rare to be able to look back when you’re always looking forward, and I think our team is forcing Ross and me to celebrate [our accomplishments] more,” she said. “It is crazy to think just a few years ago we were doing a product demo at 7 a.m. to sell our first box of biscuits and now to be in thousands of locations, our faces on freezer doors, and our people being evangelical about how much it means to work for such diverse leaders. I am so proud, and I can’t wait to keep pushing the envelope.” < 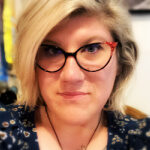 ← Previous Story EOT Incubates Business Ideas and Creator Culture
Next Story → Are you covering at work?