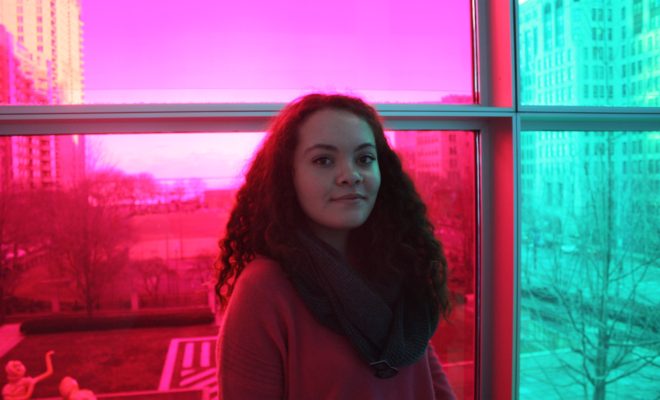 Yale University student Molly Williams is already a force to be reckoned with, and she hasn’t even graduated yet. Through studying neuroscience and creative writing, Williams explores the ways in which we think medical communities have impacted how we think about each other. As co-editor-in-chief of Yale Literary Magazine, she opened the traditionally white and predominantly male publication to inclusiveness. As an advocate on behalf of incarcerated youth and Planned Parenthood, she is making a difference in the lives of others. As a queer woman of color and an illustrator, she is drawing attention to microaggressions through vivid visuals. Learn more about this remarkable woman in our exclusive Q&A.

BEQ PRIDE: What are you studying at Yale?

Molly Williams: I am studying psychology with a focus on neuroscience. I am also completing the requirements of a second major, History of Science, Medicine and Public Health.

BEQ: What lead you to those areas of study?

MW: I was first drawn to psychology because I took a behavioral genetics class in high school that sparked an interest in the ways that biology and environment work together to influence behavior. I also believe that psychology and creative writing overlap in fascinating ways, and that learning about the way the brain works has made me a stronger writer. As I studied the basics of psychology, I began to think about how the field had changed over time and ways in which it has created unhelpful standards and norms. The HSHM major has allowed me to delve deeply into the history of psychiatry and other medical disciplines and how they have pathologized deviance in women, queer people and people of color.

BEQ: As co-Editor-in-Chief of Yale Literary Magazine, you have the opportunity to showcase pieces you feel are important for your peers. What guidelines do you use to choose these pieces? What do you want your Yale Lit legacy to be?

MW: The Lit’s process is very democratic; students can sign up to vote on pieces, and then a discussion and vote is held in person for each of the top-voted pieces. I, my co-editor-in-chief, the rest of our board and staff members all value artistry and craft; we want the pieces we select to be polished, well-organized, creative and to demonstrate that the author has committed to their work. However, my co-editor and I also feel strongly about making sure that the pieces published represent a variety of voices and perspectives. Much of this comes from doing a better job of outreach and collaboration with other organizations.

Though this academic year has been difficult, my colleagues and I would like to leave The Lit having had a tangible impact on its image as a historically white and exclusive publication. The Lit was male for 133 years of its existence, because Yale was all-male; the ratio is now more equal but it is hard to shake this history. This image often deters people who do not fit that mold from engaging with creative writing on campus, and as I myself know what that exclusion feels like, I feel especially invested in making the magazine a more welcoming space with a stronger focus on community.

BEQ: You’ve worked with and on behalf of incarcerated youth as well as on behalf of Planned Parenthood. Where does your activist/advocacy energy come from? Why did you choose these communities and causes in particular?

MW: Growing up, my parents and many adults around me were outspoken about causes they believed in, which was inspirational and an incredible example. My mother was the volunteer coordinator for a local food pantry when I was young, and I would often participate in drives; they were also involved in political activism and held events in support of local politicians.

My interest in incarceration and prison reform stemmed from an interest in racial justice; I really believe that the vast disparities in the prison system reflect broader institutional disparities, and that incarceration hurts rather than helps the predominantly POC communities affected by crime. I also am strongly opposed to the incarceration of young people, as I believe in many cases it starts a vicious cycle rather than helping them to turn things around (especially when they are given long sentences for minor drug crimes). I think education is one of the ways out of this cycle, and so getting involved in a tutoring program was a logical step.

In terms of Planned Parenthood, the right to reproductive health is non-negotiable in my opinion, and I have always been interested in helping to enforce it. Also, I was involved in phone-banking for paid family leave legislation, which underscores the fact that Planned Parenthood does so much more than provide abortions (although safe and legal abortions are important and a human right!). Overall, I am committed to any cause that helps people whose power, voices and rights have been stripped away by systemic and interpersonal discrimination, and I believe that every person who can support these causes (without putting their health or safety at stake) should do so.

BEQ: Do you have a personal mantra?

MW: One thing that I have a lot of trouble doing is staying present, so I often need to remind myself to live in the moment. I also firmly believe that self-care is important, but it’s hard to internalize that idea, so I tell myself that frequently as well. It’s crucial to give yourself permission to not be okay, because in order to take steps to make things better, you have to admit that something is wrong in the first place. 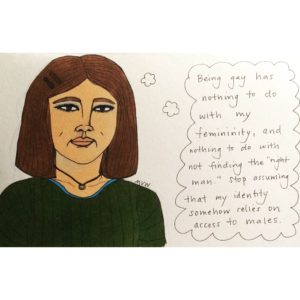 BEQ: Your creativity extends to your Instagram series, @FeministThoughtBubble. What was the inspiration for your illustrations?

MW: I started drawing the illustrations out of personal frustration with microaggressions I experienced daily. I soon began to wonder whether others were experiencing the same frustration, and whether sharing these drawings in a public forum would be a good way to start conversations about identity and make myself (and others) feel less alone. In particular, I was committed from the beginning to intersectional feminism; mainstream feminism’s exclusion of queer and trans people and people of color makes a lot of people who are already marginalized feel marginalized even further.

BEQ: What kind of responses are you receiving?

MW: I have taken a break from creating drawings in order to focus on other endeavors, but even still I receive all kinds of responses every day, from hateful comments full of misogyny and misogynoir to messages requesting personalized drawings. However, the most overwhelming response has been one of gratitude and kinship.
Many people have left comments about how something I’ve drawn happens to them all the time, and how they can recognize themselves in the drawing. That is something that fills me with a lot of hope. I have learned so much from the Instagram feminist community, and I am so happy to have found this online network of people with whom I can identify in a really radical yet comforting way.

BEQ: What are your post-university plans? How will you combine your neuroscience studies with your strong background in creative writing?

MW: Currently, I am hoping to pursue graduate study in a history-related field or receive an MFA in fiction or poetry. I would like to write about the history of medicine and neuroscience and how it has both advanced and set back some of the causes I fight for, and I would like to do so both academically and creatively.

I am also interested in visual art and would be interested in doing some projects that integrate that as well. Ultimately, I would also love to teach, because I think that sharing knowledge about the impact of history on our lives today is crucial, particularly in a political climate that feels almost like a fifty-year time warp.