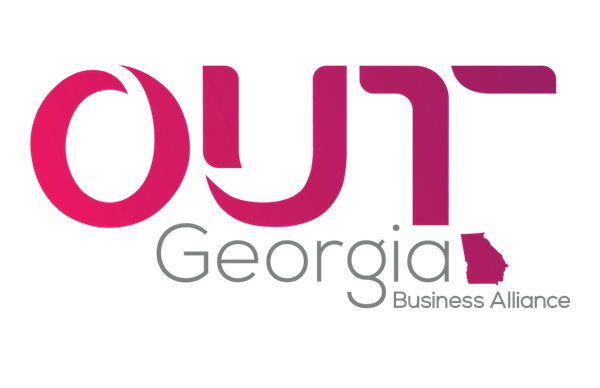 The Atlanta Gay & Lesbian Chamber of Commerce is out and proud — proud of a new name, OUT Georgia Business Alliance, that better reflects both its history of inclusivity and its new mission to expand beyond the Atlanta metro area.

The organization, which has nearly 500 small- and medium-size business members and about 40 corporate partners, began rolling out its new identity in conjunction with its 25th anniversary last year.

“The board of directors made a strategic decision to expand the scope of the organization to leverage the good work happening here in metro Atlanta and expand it to throughout the state of Georgia,” says Chris Lugo, who joined OUT Georgia as executive director in May 2019. “The old name was very specific to Atlanta. We want to raise the visibility of our business owners and be sure we are shining the spotlight on those folks who are making Georgia a more welcoming, vibrant state.”

The old name also was very specific in another way. “We recognized that although we represented the LGBTQ-plus community, our name was just the ‘G’ and the ‘L,’ ” says Petrina Bloodworth, an internal auditor and independent consultant who is president of the organization. “We had gotten some questions, especially from the trans community, and we had to look within and ask, ‘How can we be more inclusive in everything we do?’”

So, in addition to the name change, a fresh logo and a redesigned website, OUT Georgia added an inclusion board chair position to its leadership team. The post currently is held by Gabrielle Claiborne, a trans woman and co-founder of training and consulting firm Transformation Journeys Worldwide, who initially raised some of the trans community’s concerns about the old name.

“We realized we were missing a voice on this board, so we made structural changes to make sure everyone has a seat at the table,” Bloodworth says. “Gabrielle is highly visible in the community so we thought that she was an excellent pick for the first-ever Inclusion Chair seat.” 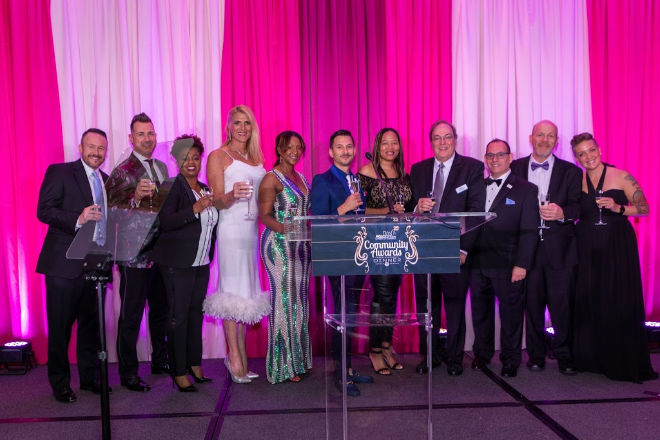 OUT Georgia board members celebrate the organization’s new name and expanded scope at the 2019 Community Awards. / Photo: Diane Haymes Photography

Caroline Leyburn, Caroline Leyburn Designs, credits the organization with helping her gain confidence as a trans business owner, noting in particular the value of gaining experience pitching during member lunches.

“The OUT Georgia Business Alliance was helpful for me early in my transition as I passed through the ‘hideous’ phase,” she says. “I was able to gain confidence publicly presenting my company at Business Builder Lunches.”

Making connections through the Business Alliance has also led to new clients and positive press for Leyburn’s home design firm.

“Several people have found me in the OUT Georgia Business Alliance Directory and contacted me for architectural design services. At least one of those has turned into a repeat client,” she says. “In 2016, the Georgia Voice was looking for someone transgender to be the subject of an article. Jennifer Lutz recommended me because I was a member [of OUT Georgia]. I still to this day have a link to that article on the About page of my website. At least one client has come to me after reading that article.”

Tasha Reid joined the organization more than six years ago to connect with other LGBTQ businesses that were “looking to grow and expand” and says it has helped give a boost to her company, Visionary Services, which provides facilities support services.

“The organization was helpful in connecting me to the national level. That connection got me invited to the White House for a Pride reception, where our company was recognized in the federal space,” says Reid, who is president and chief executive officer of Visionary Services.

As OUT Georgia expands throughout the state, Lugo says, it will rely on local business leaders and corporate partners in cities like Athens, Augusta, Columbus and Savannah to serve as OUT Georgia ambassadors and to provide insight into what those communities want most in terms of programming.

“We’re still organized as a chamber of commerce, but as a business alliance, we’re also signaling our intention to create alliances with other organizations around the state,” such as the Georgia Hispanic Chamber of Commerce and others, Lugo says. “That’s part of how we’ll grow our membership throughout the state.” Such relationships also acknowledge the diversity of OUT Georgia’s membership and the fact that members — like Reid with her woman-, minority- and LGBTQ-led business— have multiple identities.

One thing that hasn’t changed: the organization’s connection to the NGLCC and its commitment to established programs, such as serving as the certifying organization for Georgia-based businesses that want to become an LGBT Business Enterprise. To date, OUT Georgia has helped nearly 70 businesses earn LGBTBE certification, a number second only to the Golden Gate Business Association in San Francisco, Lugo says.

OUT Georgia also remains committed to a series of successful events, including its annual Community Awards Dinner, which honors LGBTQ business leaders, allies and partners, and its Rise of the Rainbow Economy business summit, first held in 2017, which brings together LGBTQ businesses, allied corporations, elected officials and candidates for office to shape the LGBTQ economy in the state.

And, this year, OUT Georgia will be involved in the WBENC National Conference & Business Fair, which will be held June 23-25 in Atlanta. Several of OUT Georgia’s corporate partners will exhibit and have other roles during the event, Lugo says, and OUT Georgia invites all attendees to its Fourth Friday event held June 26 at the UPS campus.

“We encourage everyone from WBENC, especially those who identify as LGBTQ and allies to attend,” Lugo says. “We’re excited to welcome WBENC to Atlanta and hope it’s an incredible, inspiring event.”