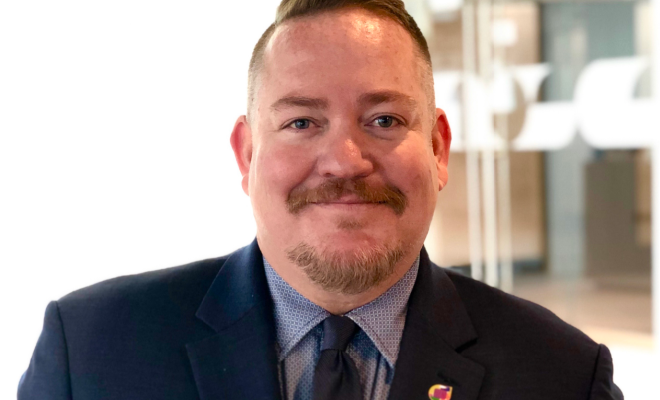 NGLCC’s Justin Nelson: “The stakes have never been higher.”

For nearly 20 years, NGLCC (the National LGBT Chamber of Commerce) has been the voice of the LGBT business community. What began as a resource for business owners has grown into an organization that not only helps entrepreneurs grow, it actively advocates for the LGBT community in legislative matters.

The organization has been actively lobbying for the passage of the Equality Act, legislation that would amend existing civil rights laws to provide consistent and explicit anti-discrimination protections for LGBTQ Americans.

“The number one issue for small business owners is access to capital, and in 35 states you can still be denied credit for being LGBT,” said Justin Nelson, NGLCC co-founder and president. “The Equality Act fixes that, among many other inequalities.”

The Equality Act was passed in the House by a bipartisan vote of 236-173 on May 17, 2019. Senate Majority Leader Mitch McConnell refuses to bring it to a vote in the Senate and the White House has signaled that the current President would not sign it into law.

“We are red-blooded, tax-paying Americans and we deserve the same freedom from discrimination as anyone else,” Nelson said. “Our economy simply does not achieve all it can unless everyone is included and given a fair shot. The protections of the Equality Act bring us much closer to the inclusion we need for the American Dream to be accessible to every LGBT American.”

GETTING OUT THE VOTE

Recently, NGLCC endorsed Joe Biden and Kamala Harris in the upcoming federal election. This marks just the second time the organization has endorsed a presidential campaign (the first was Clinton/Kaine in 2016).

“We are proud to endorse Joe Biden and Kamala Harris,” Nelson said. “They’re the team we think will focus on LGBTQ equality, ending racism and racial violence, promoting small businesses and entrepreneurship and ensuring a safe and equitable society for every American.”

NGLCC launched a voter registration program after data showed that 1 in 5 eligible LGBT voters did not vote in 2016. Nelson said the NGLCC team was particularly dismayed to see how many LGBT voters in swing states sat out that election. He suspects that many assumed Clinton would win the election easily based on polls leading up to Election Day and did not think their vote would make a noticeable difference.

This year must be different, Nelson said.

“No matter what the polls say, you need to vote to be heard and be counted,” he said. “The stakes are even higher than in 2016. Our community needs to vote to ensure we have a say in the future of this country.”

“No matter what the polls say, you need to vote to be heard and be counted”. “The stakes are even higher than in 2016. ...vote to ensure we have a say in the future of this country.” ~Justin Nelson, NGLCC https://bit.ly/35xhFqD Click To Tweet

Like many other organizations and businesses, the collision of the pandemic, economic uncertainty and civil unrest related to racial inequality in 2020 has required NGLCC to rethink processes and procedures.

The popular annual business conference was canceled due to the coronavirus, but the NGLCC team developed new online and virtual programming to support and empower its LGBT-certified members. These new resources are more tailored to individual constituencies within NGLCC, a recognition of the organization’s diverse membership.

NGLCC is a prime example of intersectionality at work, Nelson said. Because LGBT people represent the full spectrum of genders, ethnicities, socioeconomic strata, ability, expression, thought, civil service, private industry and everything in between, the organization is at the forefront of promoting both equality and equity.

“We believe that every LGBT person is a part of this economic fabric and engine that makes our economy run,” he said. “For many years NGLCC has been an access point for diverse communities coming together because we are men, women, nonbinary, from all economic classes, disabled, veterans, BIPOC – it’s only natural we would be embracing of needed cultural change and that we work hard to be agents of that change.”

NGLCC leadership also took time to examine how they are serving the people of color in the NGLCC community in particular. This summer offered an opportunity for the organization to emphasize its inclusivity and prominently support racial equality.

“I want it to be heard loud and clear, when it comes to NGLCC and our leadership, we believe and speak loudly that Black Lives Matter,” Nelson said. “Even before this much-needed dialogue on the front page, we launched our Communities of Color initiative so LGBT people of color know they have an advocate and a home at NGLCC.”

In addition to the Communities of Color initiative, NGLCC has committed to dedicating the third cohort of the XLR8 leadership program, launching in October 2020, to BIPOC, trans and nonbinary members.

None of this would be possible without the team working at NGLCC and its affiliates, Nelson said.

“Our team is doing incredible work,” he said. “They are dedicated to our stakeholder groups and believe wholeheartedly in delivering impactful programs and resources. I credit our success to the team we’ve curated.”