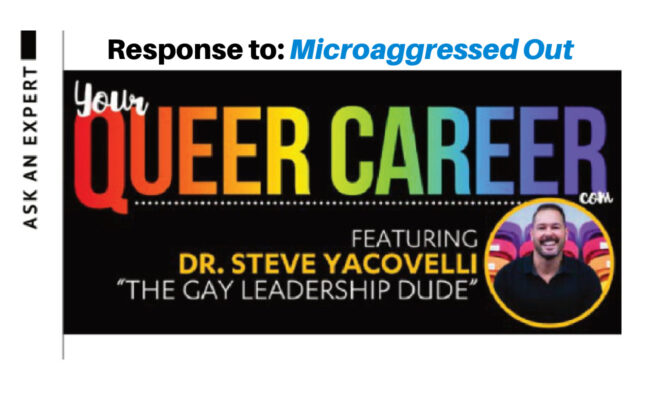 Q: Striking Back at Microinequities at Work

Hi “Gay Leadership Dude®”: There’s a co-worker in my workplace that consistently throws off some serious microaggressions. Little things like saying, “… those people …” or “… that’s pretty great even for a Millennial …” or they even once said, “if all homosexuals would …” when referring to our Community! Ugh. They’re a bit more senior than me, and I’ve not figured out how to address these statements in a respectful way. I truly just wanna yell at them and point out how rude they are being but know that’s probably not the best way to address this. Thoughts?

Thanks for writing, Micro. Yes: microaggressions are that slow torture drip-drip-drip for those of us on the receiving end. Often, according to psychologists, the perpetrators of these microaggressions (or as I like to refer to them “microinequities”) is operating from their unconscious biases and have zero clue what harm they are doing with these kinds of statements (my “favorite” is still the “OMG that’s so gay!” and not meaning in a fabulous way).

When I think of addressing these statements it’s often with the same strategies that I recommend when mitigating silent collusion. “Silent Collusion” is when your co-worker says one of these microaggressions and you (and others) don’t immediately address the statement; by your silence, you are tacitly agreeing with it. As a Leader (and remember all y’all are Leaders!) you want to address these microaggressions in a respectful manner. And to help you with this, Micro, I want to introduce you to my puppy friend Sam.

Sam is what’s called a Hungarian Puli Mop, or Mop Dog for short. You’ve seen pups like Sam before: he seriously looks like—if I attached a stick on his back—I could scrub my floors with his puppybutt (don’t believe me? Google “mop dog” to see Sam’s kin).

Sam can help us remember The 6 Ways to Beat Silent Collusion and address Microaggressions head-on. By using his name and the slang name of his breed—mop [dog] + Sam = MOP+SAM (pronounced “mop sam”! … don’t pronounce the “+”) we can remember these six strategies. (Yeah, it’s silly, but it helps people remember the six, and it works. So, trust me, or actually, trust Sam.)

M—ME … The first “M” in MOP+SAM stands for “me.” Ask yourself, “is the microinequity something that impacts me personally?” If so, you can address your co-worker from your own feelings and perspective; and your perception is your reality. Then you can address the comment from the first person. For example, let’s use your co-worker’s “… if all homosexuals would …” statement. “As a gay woman, Bob,” (“Bob” is now the name of your co-worker), “I don’t think referring to my community in that clinical term is appropriate.” The good thing about this strategy is that it focuses on you as a person, not the microaggression Bob engaged in. The challenge is that it could be perceived as confrontational in nature, so Bob may immediately be put on the defensive.

O—OUT … The next strategy, according to our friend Sam, is “O,” which stands for “out.” While the comment may not be about “me,” you can call OUT any “absolutes,” stereotypes, or gross generalizations you may hear. “So, wait, Bob, you’ve met all LGBTQ+ people, as your ‘all homosexuals’ implies?” The good thing here is—if Bob is operating on his unconscious bias, it may bring his attention to his stereotype and microaggression and allow him to see how he’s turned his unconscious bias against queer folks into a hurtful statement. The challenging thing here—like our “ME” strategy—is that it could come off as confrontational to Bob. If Bob’s unconscious bias is deeply held, he could quickly fall into defensive mode.

P—POINT … The next strategy is “P,” which stands for “point.” After the statement is said, point to a specific example that refutes the statement being said. Let’s say “Bob” completed his statement with, “if all homosexuals would keep their private life to themselves.” “Hold on, Bob. Just yesterday you commented about your private life; so only heterosexual people can share their private life at work?” The benefit of this strategy is that it illustrates an example that the person saying the stereotype can relate to, and immediately provides evidence to the contrary. The challenge is that the rebuttal can come across as something like, “well she’s the exception, not the norm” and provide a way for the owner of the biased statement to “brush away” the stereotypical comment they shared.

S—SAY … “S” is the next strategy, which stands for “say.” When we say “say,” we mean saying a non-word that at least indicates you don’t agree with what’s being said. Sounds like “Woah!” “Damn!” “Whaaaat?” or “Huh?” are some you can try here. But find one that fits within you and your personality; don’t force something. The benefit of this response is that it’s not very confrontational, but sends the message that you don’t necessarily agree with the microaggression being said; you break the “silence” in the “silent collusion.” The challenge is that it’s nothing more than acknowledging that you personally don’t agree with the statement being said, it doesn’t go far in addressing the microaggression.

A—ASK … The next strategy is “A,” which stands for “ask.” This one is rather simple: ask the person exactly what they meant by their comment. Ask a question directly such as, “Bob, what exactly did you mean by ‘all homosexuals’?” The benefit is—like some other strategies—it directly addresses the statement and may allow Bob to break out of his unconscious bias microaggression and hear it for what it is. It’s also more of a neutral statement; whenever you are asking for clarification—in a neutral tone—you cannot be accused of being adversarial. The challenge is with the tone you use. It would be easy for emotions to get the better of the deliverer (that’s you!) and ask the same question in an accusatory tone. Be careful; the words are fine but it’s the tone that matters.

M—MOVE … Our final strategy in MOP+SAM is the second “M,” which stands for “move.” As a last resort, if you cannot or don’t feel comfortable or safe speaking up, then physically remove yourself from the situation/conversation. The benefit is that your non-verbal movement will speak volumes that you don’t agree with what’s being said. The challenge is that—like our “SAY” strategy—it’s nothing more than acknowledging that you personally don’t agree with the statement being said; it doesn’t go far in addressing the statement.

Using MOP+SAM isn’t being the HR Police or being overly sensitive, Micro, it’s just a way for us to be mindful of the words and the phrases used around us and address those microaggressions we way too often here in our workplace. Word choice matters, and helping people see that the words they’ve used have an impact can make our conversations—and the world—just a little bit more inclusive. And who better than a sponge-on-a-stick and a fuzzy dog to help us do just that. Woof.

HAVE A QUESTION FOR “THE GAY LEADERSHIP DUDE”? Submit @ www.YourQueerCareer.com Please note the advice shared is for informational use only; it is not intended to replace or substitute any mental, financial, medical, legal, or other professional advice. Full disclosure can be found at the website listed above.

Business-Equality
← Previous Story Q: Giving Effective Feedback to Team Members
Next Story → Q: Balancing My “Authentic Self” with My “Professional Self”