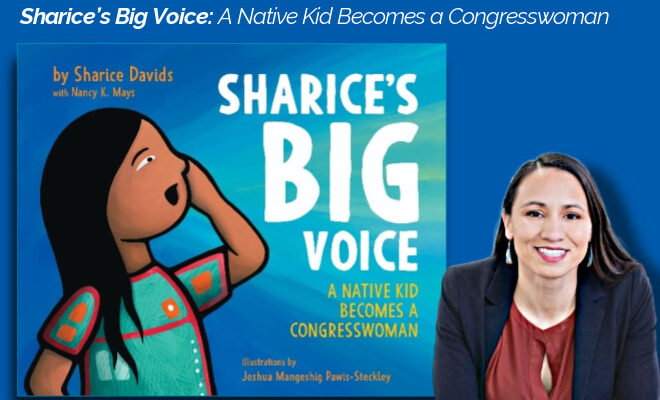 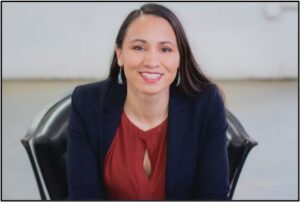 “I think in stories,” Sharice Davids said when we met via Zoom recently. “I make a lot of analogies and share stories to illustrate a point.”

We were delighted to catch up with Davids, a member of the BEQ Pride 40 LGBTQ Leaders Under 40 Class of 2021, to talk about her latest project: a children’s book. Sharice’s Big Voice: A Native Kid Becomes a Congresswoman, the story of her journey so far, from talkative kid to member of the United States House of Representatives.

This picture book autobiography celebrates two significant “firsts” – Davids (D-KS) is one of the first two Native American women elected to Congress and the first openly LGBTQ+ congressperson to represent Kansas in Washington.

Davids is the daughter of a single mother and a member of the Ho-Chunk Nation. Becoming Representative Davids was a journey with “tons of twists and turns and ups and downs”, a winding path she wanted to write about to give young people another perspective about their own journeys.

“I never thought I was going to be a member of Congress,” she said. “I’m sure people think I was valedictorian of everything but that wasn’t my experience. That’s why I share some of the stories like the ones in the book.”

For example, it took Davids eight years to earn her Bachelor’s degree before going on to Cornell Law School.

“The interesting thing is, that’s actually not an uncommon experience,” she noted. “It’s not uncommon for people to take longer than four years to get a degree. But people don’t get to see that as often because those aren’t the stories getting shared widely.”

Representation is at the heart of Davids’ work both as a politician and now as a children’s book author. She is one of two Native American women serving in Congress currently – Yvette Herrell (R-NM) is the other; Deb Haaland, who was elected in 2018 along with Davids, is now Secretary of the Interior. The number of books about Native Americans makes up a tiny percentage of the number of children’s books published each year. Even fewer are written by Native Americans. 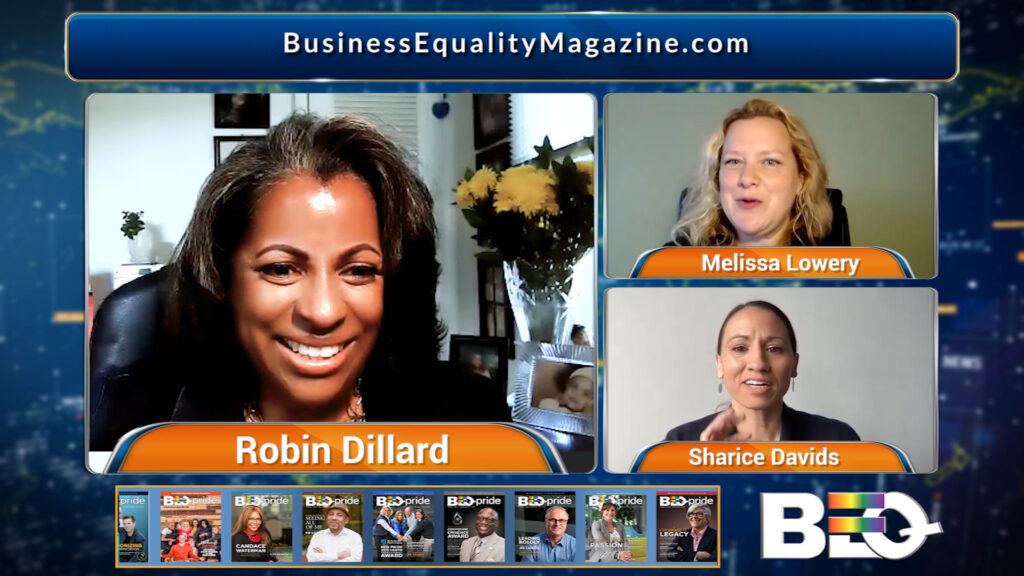 “It’s really important that voices that are different than the other ones in the room are included,” Davids said. “I was blown away but not surprised, if that makes sense, that only about one percent of kids’ books have any kind of Native American representation in them. So playing a small part in helping someone [who doesn’t see themselves represented normally] see that, ‘Oh, my journey is unique and important,’ that’s a really cool thing to do.”

It was important to Davids and the rest of the team at HarperCollins that her story be illustrated by a Native American artist. She ultimately chose to work with Joshua Mangeshig Pawis-Steckley, an Ojibwe Woodland artist known for his vibrant color palettes and modern approach to native heritage.

“One of the things that I love about Joshua’s pictures is that some of the characters in the book you can’t tell their gender,” she said. “There are plenty of characters where you would have no way of making gender assumptions and I loved that he took that approach.”

As she writes in the book, the Ho-Chunk Nation refer to themselves as “People of the Big Voice”. A descriptor Davids says is accurate.

“I got in trouble a lot when I was in school for talking too much,” she said, chuckling. “I still talk a lot and it turns out that can be a positive skill set.”

“Kid Sharice”, as Davids refers to her younger book self, talks a lot. It’s one of her defining characteristics and the story shows how being curious about other people, how talking with people and listening to them talk, how using her big voice to talk about what she believes in carved her path to Congress.

“That’s the crux of the book,” she said. “So often when you’re a kid you feel invisible or small, not heard or not seen. I hope this book can help a kid feel like their experience is validated and their journey is important.”

Sharice’s Big Voice: A Native Kid Becomes a Congresswoman is on sale now.

Beautifully illustrated by Joshua Mangeshig Pawis-Steckley, an Ojibwe Woodland artist, this powerful autobiographical picture book teaches readers to use their big voice and that everyone deserves to be seen—and heard!

The back matter includes information about the Ho-Chunk written by former Ho-Chunk President Jon Greendeer, an artist note, and an inspiring letter to children from Sharice Davids.