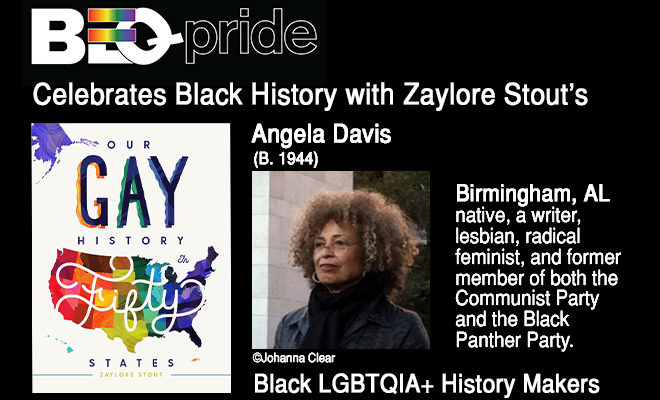 Angela Davis (Birmingham, AL) is a writer, lesbian, radical feminist, and former member of both the Communist Party and the Black Panther Party. As a young girl, her family moved to a predominantly white neighborhood, followed by other Black families, which angered her white neighbors and caused them to try to segregate the neighborhood. Some white people in the area even bombed the homes of their Black neighbors.

Davis attended a segregated school and knew the four girls killed in the 1963 Birmingham Church Bombing. She earned a degree in philosophy in France before she returned to the States to work as an activist in the Civil Rights Movement. She received a Ph.D. in Marxist philosophy from UC San Diego in 1967. Around this time, she joined the Che-Lumumba Club and associated with the Blank Panthers. Sometimes viewed as a controversial figure, Davis was the third woman ever listed on the FBI’s most-wanted list.

She became a respected philosophy professor and wrote about prisons, racism, and feminism. Her books include Women, Culture, and Politics; Are Prisons Obsolete?; and Abolition Democracy: Beyond Empire, Prisons, and Torture. She has been a professor at UCLA, San Francisco State University, and currently UC Santa Cruz. She also ran as the Communist Party’s candidate for vice president in 1980 and 1984. Davis came out as a lesbian in 1997 in Out magazine. In 2017, Davis was a featured speaker and honorary co-chair at the Women’s March on Washington after Donald Trump’s inauguration.