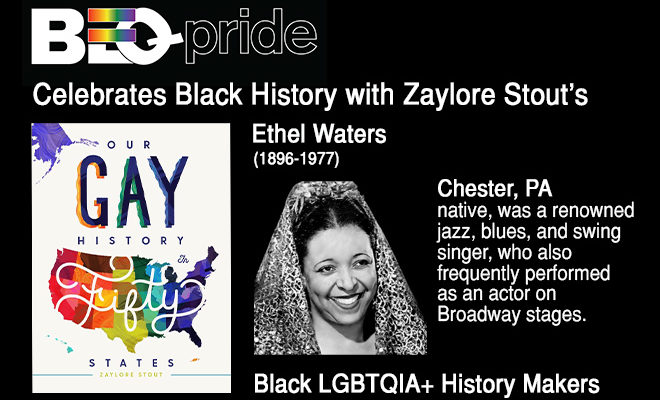 Ethel Waters (Chester, PA) was a renowned jazz, blues, and swing singer, who also frequently performed as an actor on Broadway stages. Before launching into a career famous for recordings such as “Stormy Weather,” “Cabin in the Sky,” “Taking a Chance on Love,” “Dinah,” “Heat Wave,” and “I’m Coming Virginia,” Waters was just a seventeen-year-old girl celebrating her birthday at a local Philadelphia nightclub in 1913. That night, her friends persuaded her to sing two songs, so impressing the audience that she was offered to work at the Lincoln Theatre in Baltimore.

Waters married three men in her lifetime, and was in a relationship with dancer Ethel Williams, with whom she performed under the name the Two Ethels. Waters went on to star in the 1950 TV show Beulah, the first Black actor to star in her own show. In 1961, Waters appeared in an episode of Route 66, which earned her an Emmy nomination in 1962—she was the first Black woman ever to be nominated.