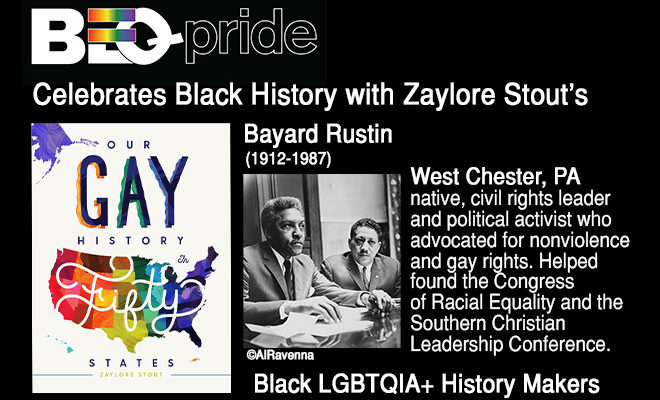 Bayard Rustin (West Chester, PA) was a civil rights leader and political activist who advocated for nonviolence and gay rights. As a student, Rustin attended two of the oldest predominantly Black institutions in the country, Wilberforce University and Cheyney State Teachers College, though he did not graduate from either. After moving to New York City, Rustin taught English, performed in several musical acts, and became active in antiracist politics.

A close mentor to Martin Luther King Jr., Rustin pushed for nonviolent civil protest during the civil rights movement of the 1950s and ’60s and helped found the Congress of Racial Equality and the Southern Christian Leadership Conference. Despite his influential presence in social and political movements, the fact that Rustin was openly gay often forced him to work out of the public eye.

Rustin died at age seventy-five in 1987. Ronald Reagan praised him that year for his conviction in the civil rights movement; in 2013, Barack Obama awarded Rustin a posthumous Presidential Medal of Freedom.