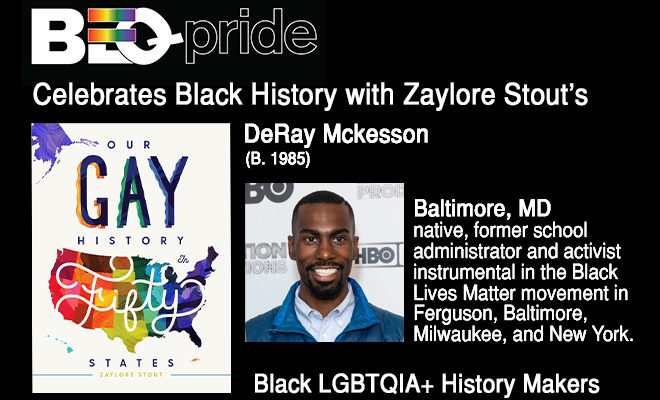 DeRay Mckesson (Baltimore, MD) is a former school administrator and activist instrumental in the Black Lives Matter movement in Ferguson, Baltimore, Milwaukee, and New York. After the 2014 murder of Michael Brown, Mckesson drove from Minneapolis to Ferguson to participate in the protests and live-tweeted his experience. He recorded himself being tear-gassed, the arrival of armored police vehicles, and the shots fired outside the Ferguson Police Department.

With other activists, he helped publish the newsletter This Is the Movement, which independently reported the events in Ferguson. Mckesson used his Twitter account to organize protests, make political commentary, and tweet inspirational messages. In 2018, Mckesson published On the Other Side of Freedom: The Case for Hope, a memoir of his involvement with BLM. One of the impetuses for the book, he says, was his sexuality: “I know that I’m a gay black man every time I come into a space, and what does that mean to be in movement spaces or other spaces where people are homophobic, but like me? I wanted to write about that.”