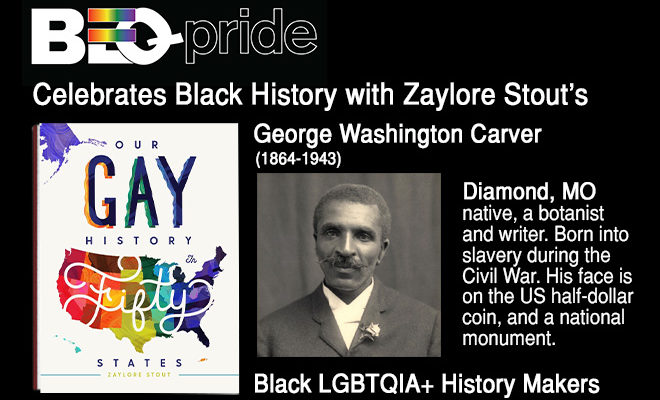 George Washington Carver (Diamond, MO) was a botanist and writer. Born into slavery during the Civil War, Carver liked spending time in the woods and collecting flowers and rocks, which he said “was considered foolishness . . . to waste time on flowers.”

As a young adult, Carver worked as a cook to pay for his tuition at Simpson College in Iowa. He went on to become the first Black faculty member of Iowa State Agricultural College, where he earned his master’s degree. Among Carver’s many scientific contributions, he discovered that peanuts had a restorative effect on soil’s nutrient content. He also developed over three hundred uses for peanuts, including peanut-based paper and soap.

Carver’s biographers believe he was bi-sexual. In 1943, at age seventy-nine, Carver fell down a flight of stairs and died shortly after. He is in the USDA Hall of Heroes, the National Inventors Hall of Fame, and the Hall of Fame for Great Americans. Carver’s face is on the US half-dollar coin, and a national monument and national park stand in his honor in Newton County, Missouri.