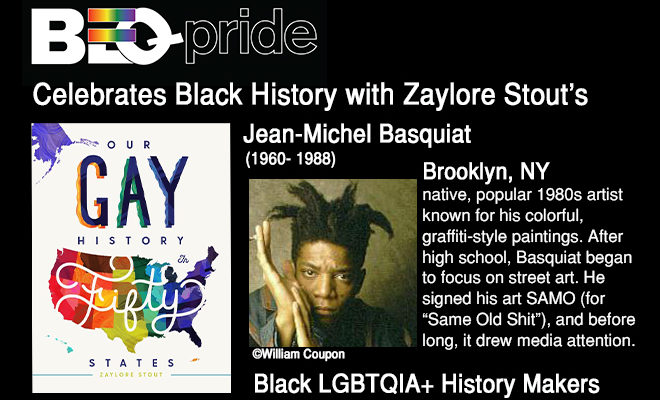 Jean-Michel Basquiat (Brooklyn, NY) was a popular 1980s artist known for his colorful, graffiti-style paintings. After high school, Basquiat began to focus on street art. He signed his art SAMO (for “Same Old Shit”), and before long, it drew media attention. Though he spent some time homeless, he began to show his work in galleries and became associated with the neo-expressionist and punk art movements. Basquiat began to do more gallery shows throughout the ’80s; of Haitian and Puerto Rican heritage, he often show-cased art that featured Black celebrities and dealt with African Diaspora. In the mid-’80s, Basquiat released a series of collaborations with Andy Warhol. Throughout his career, he received praise from Artforum, the Village Voice, and the New York Times. Basquiat struggled to deal with his instant fame, and at times resented the art establishment. He died of an overdose in 1988, when he was twenty-seven years old. In her 2010 memoir Widow Basquiat, Jennifer Clement, his former partner, described his sexuality as multichromatic, saying, “He was attracted to people for all different reasons. They could be boys, girls, thin, fat, pretty, ugly. It was, I think, driven by intelligence. He was attracted to intelligence more than anything . . .”