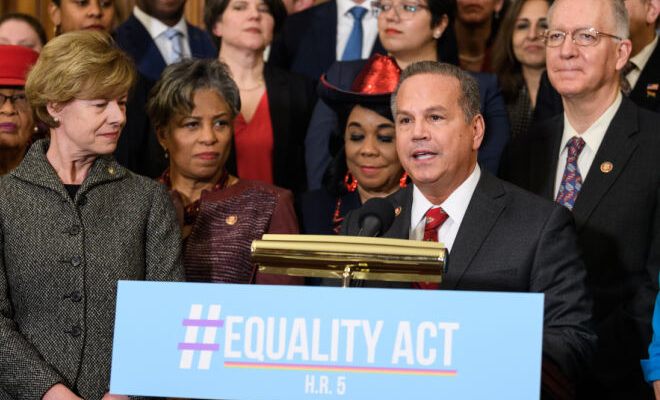 The Fight Continues for the Congressional LGBTQ+ Equality Caucus

The Congressional LGBTQ+ Equality Caucus was founded in 2008 by then-Representatives Tammy Baldwin (D-WI) and Barney Frank (D-MA) with a mission of extending civil rights to and eliminating discrimination against those who are or are perceived to be LGBTQ. The caucus has played a significant role in many LGBTQ achievements over its 16-year history.

The historical victories are clear, but in the wake of a slew of anti-transgender legislation, it is clear that the Caucus’s work must continue. We wanted to know what the Caucus of the current Congress was engaged in. We were also particularly curious about what the Caucus had planned regarding two recent US Supreme Court matters – one decided case and one pending.

For answers, BEQ Pride reached out to Caucus Chair Representative David N. Cicilline of Rhode Island, who currently chairs the Equality Caucus with the eight other openly LGBTQ+ House Members serving as Co-Chairs. The Representative shared a list of efforts and accomplishments that is probably longer than the average American is aware of and includes a look at the importance of legislation in the advancement of LGBTQ rights in entrepreneurship, business, and the labor market.

BEQ: There are certain laws that come immediately to mind when we think about the fight for equality for LGBTQ+ people, including the Don’t Ask Don’t Tell Repeal Act and the Matthew Shepard and James Byrd, Jr. Hate Crimes Prevention Act. The LGBTQ+ Equality Caucus was instrumental in these victories, but what is happening in this particular Congress that might not yet be as prominent as those landmark pieces of legislation?

Cicilline: This year, we built upon the success of the 2013 reauthorization of the Violence Against Women Act (VAWA) and included additional support for LGBTQ+ survivors of gender-based violence in the 2022 VAWA reauthorization. Violence against our community — and other marginalized communities — is unfortunately still too common, which is why in this Congress we also passed into law legislation to both designate the memorial at the Pulse Nightclub as a national memorial and the Jabara-Heyer NO HATE Act to support hate crime victims and improve related data collection.

The Caucus has also supported numerous bills which have passed the House this Congress but are unfortunately still waiting for Senate votes. Last year, we passed my bill, the Equality Act, out of the House of Representatives to amend our civil rights laws to explicitly prohibit discrimination on the basis of sexual orientation and gender identity in employment, housing, public accommodations, education, federally funded programs, credit, and jury service. The House also passed Co-Chair Ritchie Torres’ LGBTQ Business Equal Credit Enforcement and Investment Act to require the collection of small business loan data related to LGBTQ-owned businesses—data that is essential to addressing discrimination against our community. Earlier this year, we passed the Global Respect Act, a bill I introduced to deny visas to those who commit human rights abuses against LGBTQI+ people abroad.

BEQ: The damage from the US Supreme Court decision overturning Roe v. Wade is wide-reaching on its own. On top of that, its aftermath has included threats to other rights, including marriage equality. The Respect for Marriage Act is a clear response to that threat, and the bill passed the House back in July. What are its chances in the Senate?

Cicilline: The Respect for Marriage Act would repeal the discriminatory Defense of Marriage Act, enshrine marriage equality for federal law purposes, and provide additional marriage protections at the state level. Right now, the Senate has the power and obligation to pass this crucial piece of legislation. Senate Majority Leader Schumer has announced that a vote on the Respect for Marriage Act is likely to happen in September. After the Supreme Court’s decision in Dobbs v. Jackson Women’s Health Organization and Justice Thomas’ alarming concurring opinion, it is critical that we do everything we constitutionally can to ensure that marriages across this country continue to be recognized and protected. The vast majority of Americans — Democrats, Republicans, and Independents — support marriage equality, and I am glad the Respect for Marriage Act passed with bipartisan support in the House. The Respect for Marriage Act has already garnered bipartisan support in the Senate, and I am hopeful we can send this bill to the President’s desk before the end of the year. In the coming months, the Equality Caucus will continue to support legislation that includes provisions promoting equity and inclusion for all people in this country.

BEQ: Going back to discrimination in business and in the marketplace, Creative LLC v. Elenis, is on the docket of the US Supreme Court. What is next for the Caucus following the amicus brief you recently submitted?

Cicilline: 303 Creative LLC v. Elenis is an alarming case where petitioners in Colorado are arguing that they should be able to discriminate against same-sex couples, despite a Colorado law that prohibits discrimination on the basis of sexual orientation in public accommodations. I was proud to lead more than 100 of my colleagues in filing an amicus brief to the Supreme Court to defend nondiscrimination laws – in Colorado and across the country. Although this case is a challenge to a Colorado nondiscrimination law, it potentially could be used to weaken public accommodations nondiscrimination laws more generally by providing a constitutional right to discriminate in certain instances against LGBTQ+ people and other marginalized groups. We hope that the Supreme Court will rule against the petitioners.

Although this case threatens existing state and federal nondiscrimination laws, many people don’t realize that LGBTQ+ people still lack explicit protections in many areas of federal law. The Supreme Court has ruled, correctly, that Title VII of the Civil Rights Act prohibits employment discrimination against LGBTQ+ people, but we must codify these protections and ensure strong, explicit protections for LGBTQ+ people in all key areas of life – which is exactly what my bill, the Equality Act, does. Beyond the moral imperative, equality is also good for business, which is why more than 500 corporations have endorsed this critical legislation.

The work for LGBTQ equality goes on, and the LGBTQ+ Equality Caucus remains steadfast. “The Equality Caucus is proud to support bills that will improve the well-being of LGBTQ+ people,” Cicilline said, “and help ensure we live in a country free of discrimination and inclusive to all people, where LGBTQ+ people have the same opportunities as their non-LGBTQ+ counterparts to thrive in all aspects of their lives.” <

← Previous Story Beyond the Flight Deck