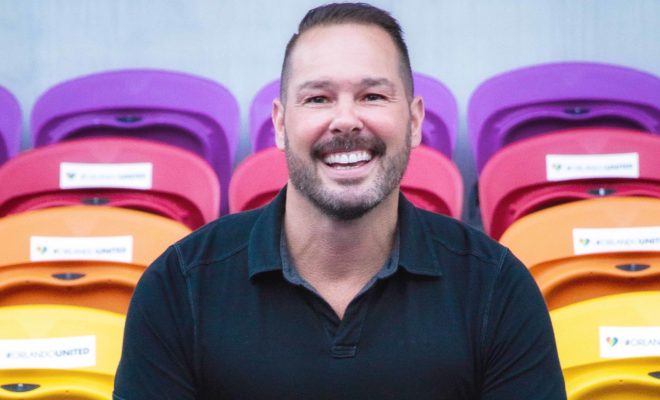 Dr. Steve Yacovelli, known as “The Gay Leadership Dude,” spent 25 years studying and learning and teaching what it takes to be a great leader. From the high seas to the boardroom, from corporate educator to entrepreneur, his life’s work is helping others harness and leverage their leadership abilities. Now he’s using that extensive knowledge to help members of the LGBTQ+ community become leaders in the workplace and beyond.

Yacovelli graduated from Millersville University of Pennsylvania in the early 1990s with a degree in Speech Communications – Public Relations. After college, he tried a few jobs — a short stint working for Walt Disney World taking phone reservations pre-internet, then doing marketing and PR for a small bank, then client education for a small software company — before deciding to pursue a Master’s at The Ohio State University in Leadership. When he received a job offer back in Orlando, Florida, he jumped at the opportunity to return to his designated new home. It proved to be a wise choice in more ways than one.

“I moved to Orlando on a Monday, and Friday I met the man who is now my husband,” he says. The couple has been together for nearly 21 years and still lives in Orlando with their two canine kids, Ella and Russel. After several years working for companies both internal like Disney (again), IBM, The University of Central Florida, and Tupperware, Yacovelli eventually went out on his own and now helps organizations improve performance and learning in the workplace through his firm, TopDog Learning Group, LLC.

From cruise ship to entrepreneur

It was while working for The Walt Disney Company again, this time as an internal leadership consultant for Disney Cruise Lines, that the idea for TopDog was formed. Yacovelli and his colleague, Ruth Bond, would sail on the ships and conduct training classes, executive coachings, and other consulting tasks, then return “shoreside” to work in the home office.

During a cruise, Bond came to him and said, “Together we’re the perfect Chief Learning Officer. We should start a company.” The part-time consulting firm was founded in 2001 and became Yacovelli’s full-time job in 2008 after he spent several years working for other organizations. (After 25 years with Disney, including serving as Vice President of Global Diversity & Inclusion, Bond became a full-time consultant with TopDog in 2018.)

Yacovelli’s experience working with top corporations as both an internal and external consultant gave him plenty of opportunities to observe and explore what it takes to be an effective leader in any situation. An academic at heart — he earned his doctorate of education in instructional technology and distance education in 2005 — Yacovelli uses the data from working with hundreds of people to optimize his corporate training and inform his work as a consultant in change management and leadership.

“When I reflect on these very different organizational cultures as well as my position within and observing them, the three common leadership traits that emerge are having integrity, building relationships and having empathy,” he says. These core traits are foundational for great leaders and form the basis of Yacovelli’s training.

“The biggest takeaway from these three competencies and what I’ve learned in my 25 years in leadership is: if you can build trust, then you are an effective leader,” he says. “If people trust you, they will follow you, allow themselves to be influenced by you, and also work to protect the relationship they have with you. When you have someone’s trust, you are golden.”

Cultivating leadership in the LGBTQ+ community

Over the course of more than two decades working with top corporations to enhance their workforce, Yacovelli noticed several connections between the traits of effective leaders and traits he sees in many members of the LGBTQ+ community.

His new book, Pride Leadership: Strategies for the LGBTQ+ Leader to be the King or Queen of their Jungle, combines proven leadership traits and the uniqueness of the LGBTQ+ experience into a powerful guide for the LGBTQ+ community.

“A few years ago, I started to look at LGBTQ+ leaders around me who were just crushing it,” he recalls. “Channeling my inner Carrie Bradshaw [a reference to the “Sex and the City” writer], ‘I couldn’t help but wonder:’ did these LGBTQ+ leaders have a natural tendency to the leadership competencies that I’ve seen ‘make or break’ leaders?”

Very little has been published about the intersection of being a member of the LGBTQ+ community and effective leadership competencies; even less research exists in this space. So, Yacovelli set out to fill that knowledge gap with his own research and thought leadership.

“Thinking about the competencies I was seeing differentiate ‘great’ leaders from ‘meh’ leaders, it was skills that — in general — LGBTQ+ people have cultivated simply because of who they are and their shared experience as being ‘other’,” he says. “That experience, while wicked hard at times, is something that flexes these leadership muscles to be stronger over time.”

Yacovelli noticed that LGBTQ+ people often have a high competency in skills crucial to being an effective leader, simply as a result of the “wicked hard” experience of being an “other”, especially a mostly “invisible other”. Whereas most minority groups typically cannot hide their otherness, for the most part, an LGBTQ+ person chooses to share their authenticity with the world, an act of authenticity and courage in and of itself.

“There are many of these frankly crummy at times experiences of being that ‘other’ which can develop us to be more empathetic, authentic, courageous, communicate better to different people, foster relationships and build coalitions and help shape organizational culture to be more inclusive,” Yacovelli says. “These are the six competencies I focus on in Pride Leadership because they are what makes a great leader.”

He goes on to note that, while the concepts he talks about in the book are universal to all leaders, Pride Leadership “was written specifically with my LGBTQ+ brothers and sisters in mind. The stories, anecdotes, situations and Dad jokes are framed through my lens as a member of the LGBTQ+ community. So, allies are very welcome to enjoy the concepts and strategies within the book, but I channeled my narrative to specifically resonate with my community.”

Pride Leadership: Strategies for the LGBTQ+ Leader to be the King or Queen of their Jungle is available June 5, 2019. Learn more about Dr. Steve Yacovelli at thegayleadershipdude.com.

← Previous Story Legacy Leader Nominations
Next Story → How Far We’ve Come: A Snapshot from Out for America