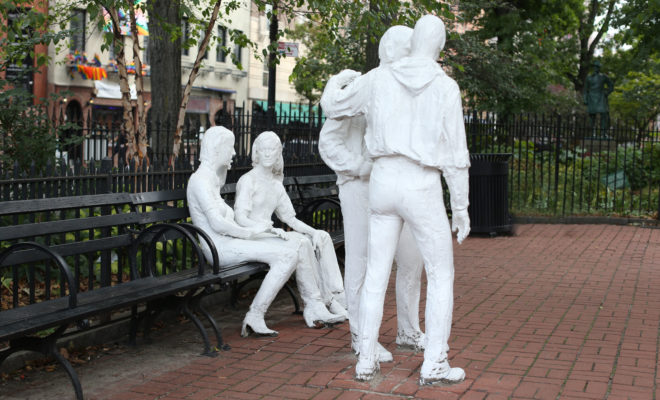 The Struggle. The Uprising. The Promise.

June 28th, 1969. I was almost a year old and, so I’ve been told, spending most of my days learning how to walk and eating lots of Kellogg’s Apple Jacks cereal — this was obviously before it was a crime to feed children a hefty dose of processed sugar as a healthy meal. I’d find out decades later the significance of the events triggered by the uprising at 53 Christopher St, in New York — The Stonewall Inn. What I’ve learned about the uprising and the courage of Marsha P. Johnson, Silvia Rivera, Storm DeLarverie, Tammy Novak and other patrons left an indelible mark on my being, begging a widening of my understanding of identity, inclusion and full equality — my very own “great awakening”.

From a historical perspective, the Stonewall Uprising was a fait accompli traced back to 1924 with Henry Gerber’s Society for Human Rights and his Friendship and Freedom publication. Through works like Gerber’s as well as documentaries, newspapers, movies and museums, I carefully acquainted myself with the lives of so many people — people living right alongside me, in my history books, in my family and in the media — people wanting and needing to be fully seen and heard. This commemorative issue of BEQ Pride is dedicated to the struggle, the uprising and the promise of a movement that didn’t actually begin on a late night in late June of 1969. A movement that could never fully be acknowledged by labeling it “gay” or using an acronym LGBTQIAA/SGL…+ or a rainbow — this is a movement like many others that will contribute to our evolution as human beings. We are all on a quest for life, liberty and the pursuit of happiness, aren’t we?

In November of 2018, I decided to take my own photos of the sculpture Gay Liberation by American artist George Segal, located in Christopher Park along Christopher Street in the West Village neighborhood of Manhattan, New York. These are my favorites from that morning. I was able to imagine the sights and sounds and smells of this place 50 years ago. I spent time considering the many hardships and sacrifices of many people that have passed on and all the unsung among us who are paving the way. If the statues could tell a story, what they would say?

In this issue, we have an exciting tribute to Legacy Leaders over 50, people born before July 1st, 1969. We are sharing their contributions to the community and society and, in many cases, their own words about what inspires them and why they’ve dedicated themselves to their life’s work and achievements. They are fulfilling the promise of the uprising at Stonewall. Enjoy getting to know some amazing people nominated by our readers while we celebrate their leadership.

Julie A. Palm’s “Use Your Privilege for Good” is about GlaxoSmithKline’s Tracey Fama’s special brand of allyship and advocacy from a place of privilege. Tracey reminds us that the “privilege that comes from being part of a majority group, that privilege that can feel uncomfortable, is a superpower.”

We also have Dr. Tyree Oredein sharing her insights on Intersectionality. I was invited to a symposium where she challenged the audience to think deeply about identity and inclusion.

Our editor, Melissa Lowery, introduces you to author, trainer, entrepreneur Dr. Steve Yacovelli, The Gay Leadership Dude. Melissa spoke with Dr. Steve just before the launch of his brand-new book Pride Leadership: Strategies for the LGBTQ+ Leader to be the King or Queen of their Jungle and it is available now. Dr. Steve says, “having integrity, building relationships and having empathy” are common traits among great leaders and form the basis for his leadership methodology. This won’t be the last time you hear from Dr. Steve; he will be a contributor in upcoming issues of BEQ Pride.

Irwin Drucker and Diversitas, Inc. have done a world of good for so many LGBTBEs through his pioneering work with IBM and NGLCC. He has expanded his consultancy, his sphere of influence and his brilliant advocacy to include business development and associated services for other small businesses.

Once again, we have a brand new list of Business Equality Excellence Award recipients for 2019. This year’s list, later than our normal winter announcement, includes 138 organizations with superpowers — okay, maybe not superpowers, but they have demonstrated their commitment to LGBTQ inclusion in the workplace, multicultural market engagement and diversity in their supply chain, not just as a matter of policy, but a matter of practice.

Finally, we decided to pause and acknowledge How Far We’ve Come. It’s been 50 years since the Stonewall uprising and things are changing, at least in the ballot box. As of our print date, the United States has 705 LGBTQ+SGL elected officials in cities large and small, and we’re still counting. And Mayor Pete Buttigieg of South Bend, Indiana’s candidacy for POTUS foretells a great future ahead.

← Previous Story How Far We’ve Come: A Snapshot from Out for America
Next Story → Perspective: Intersectionality