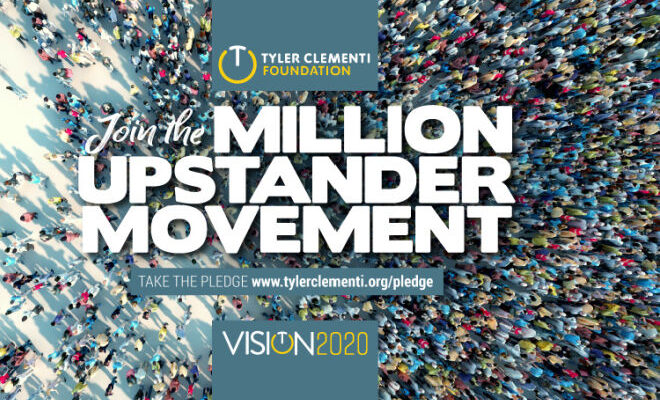 Upstanders: The Tyler Clementi Foundation calls for action against bullying

“I will stand up to bullying whether I’m at school, at home, at work, in my house of worship; whether I am speaking in the digital cyber world or out in the real world with friends, family, colleagues or teammates.”

More than 1 million people have taken that oath as part of the 10-point Upstander pledge to not use bullying language and behaviors, to put a stop to bullying when they witness it online or in person and to assist people who are being bullied. The Million Upstander Movement was launched two years ago by the Tyler Clementi Foundation, which marks its 10th anniversary this fall.

“We strongly believe we need more Upstanders in this world, more people who will stand up and speak out in a bullying situation, not remain a passive bystander,” says Jane Clementi. “It’s a daily decision to be an Upstander.”

The foundation is named for Clementi’s son, Tyler, a Rutgers University student and an openly gay man who was relentlessly bullied after his roommate surreptitiously posted a video online of Tyler and a date being intimate. Eighteen-year-old Tyler died by suicide on Sept. 22, 2010, several days after the incident. His parents co-founded the organization shortly after his death, and Jane Clementi left her job as a public health nurse in 2018 to become its chief executive officer full time.

While the Upstander pledge lays out clear actions people can take when they encounter bullying, Clementi urges people to think of the concept more expansively.

“We also need to be Upstanders in all areas of our life,” she says. “We need to vote for people who are respectful and who will stand up for everyone, who will support anti-bullying and anti-discrimination legislation. We need people to be Upstanders by supporting companies that are inclusive and supportive of all their employees.”

In addition to becoming an Upstander, Clementi encourages people to participate in the foundation’s #Day1 campaign designed to stop bullying before it starts — and wherever it occurs. The foundation offers specific #Day1 toolkits for use by a variety of organizations, including workplaces and faith groups.

One faith group, the Southern Baptist Convention, is the focus of the foundation’s latest initiative. True Faith Doesn’t Bully is an education campaign “to show the immense harm and pain that the Southern Baptist Convention has caused with their harmful teachings and traditions of dogma, bias and discrimination against the LGBTQ+ community,” according to a news release. Prominent ministers and LGTBQ leaders (including Alphonso David, president of the Human Rights Campaign; and Kevin Jennings, president of Lambda Legal, founder of GLSEN and son of an SBC preacher) are writing letters to pastors of several influential Baptist churches (including those attended by Senate Majority Leader Mitch McConnell and House Minority Leader Kevin McCarthy).

“I believe that bullying can also happen from the pulpit. Preaching messages of condemnation that elicit feelings of fear, shame and even terror is a form of bullying. It could even be called psychological or religious terrorism. My hope is that as more preachers come to understand this, their dogma and teachings will change,” Clementi says. “We want everyone in the pews to know that they are loved and affirmed — and that there is a huge faith community that supports the LGBTQ community. We are not encouraging people to leave their faith; we want them to know that there are many churches that are inclusive and affirming.”

Clementi doesn’t expect True Faith Doesn’t Bully to enjoy the relatively quick results of the Upstander campaign. “This is a long-term initiative,” Clementi says. “But if we can save even one child from harm or one family from being destroyed or broken, that’s reason enough to keep doing the work.”

For more information about the foundation and its initiatives, visit tylerclementi.org.