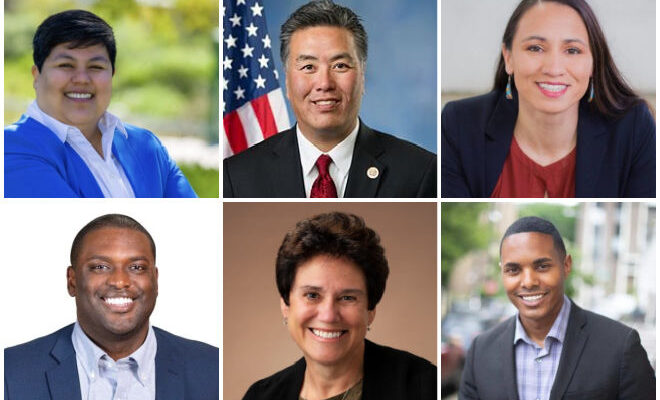 The 2020 election is set to be a defining moment for the United States and our ongoing “experiment with democracy”. While much of our attention is on the battle for the White House, several LGBTQ candidates for state office and Congress are poised to significantly impact our quality of life if they are elected.

In 2018, 160 openly LGBTQ candidates were elected at all levels of the U.S. government. Each of them had the backing of Victory Fund, an organization founded in 1991 “to change the face and voice of America’s politics and achieve equality for LGBTQ Americans by increasing the number of openly LGBTQ officials at all levels of government,” according to its website.

This year, a record 574 openly LGBTQ candidates will appear on ballots in November. Victory Fund has endorsed 397 candidates during the 2020 election cycle, more than ever before.

“A historic number of openly LGBTQ people are running for office this year and we have the opportunity to elect an unprecedented number on Election Day,” said Mayor Annise Parker, President & CEO of LGBTQ Victory Fund. “But this is not about breaking records or making history. When LGBTQ people are in the halls of power, it changes the hearts and minds of colleagues, transforms the legislative debates and leads to more inclusive legislation.”

Among the nearly 400 endorsements, Victory Fund has identified 17 “Game Changer” candidates. Game Changer status is given to statewide or federal candidates that can become historic firsts and directly impact LGBTQ representation in the highest levels of government.

Some of these Game Changers are incumbents, like Rep. Sharice Davids (D – KS-03) and Rep. Mark Takano (D – CA-41). Davids is the first openly LGBTQ member of Congress from Kansas and one of the first Native American women elected to Congress. Takano is the only openly LGBTQ Asian American and Pacific Islander person serving in Congress.

The Game Changer slate includes several candidates who would unseat incumbents and add representation to state and national government. In New York, Ritchie Torres (D) and Mondaire Jones (D), a member of the BEQ Pride Leader Under forty class of 2020., are running for the U.S. House of Representatives in districts 15 and 17, respectively. If elected, Torres will be the first LGBTQ Afro-Latinx Member of Congress and Jones will be the first openly LGBTQ Black member of Congress in American history.

In California, Georgette Gomez (D) is running for the U.S. House of Representatives in the 9th district. Currently serving on the San Diego City Council, if she wins in November, Gomez will be the first openly LGBTQ Latina elected to Congress in history.

If elected, Beth Doglio (D – WA-10) and Tracy Mitrano (D – NY-23) will be the only openly bisexual members of the U.S. House of Representatives. And in Indiana, Michigan, Minnesota, New Hampshire and Texas, voters could send their states’ first openly LGBTQ representatives to Congress.

To learn more about these candidates and the hundreds of other LGBTQ citizens running for public office in November, visit victoryfund.org.